Why Neena Gupta gets my vote

I ran into the beautiful and supremely talented Neena Gupta at a mutual friend’s birthday dinner, on the day the National Film Awards were announced. I said, “I was hoping you would bag the best actress award for Badhaai Ho.’’ She laughed and said, “National Awards are great, but they don’t get you new roles… Filmfare Awards do… this is what Mahesh Bhatt told me years ago.” Going by Neena’s current status in Bollywood, I would agree with Bhatt. Badhaai Ho 2 has been announced and the original is being remade in Tamil, Telugu, Kannada and Malayalam. She will be seen in an Akshay Kumar-Katrina Kaif starrer soon. Originality always wins. So does boldness. Neena is both, bold and original—an intrinsic part of her DNA.

I am not sure how she bagged the tricky role of a middle-aged mother who finds herself pregnant with her third child, much to the embarrassment of her family in Badhaai Ho. Remember, Neena had done the unthinkable a little earlier, by candidly putting herself out there and asking for roles. Why ever not? Here was an award-winning actress finding herself with nothing in her kitty, despite her obvious talent and enormous popularity on television and in Bollywood. Today, she is as busy as her equally talented fashion designer daughter Masaba, and divides her time between Delhi and Mumbai. 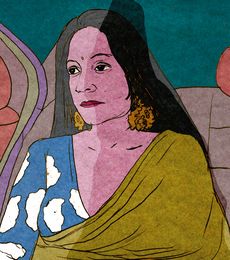 Neena, the breaker of rules and hearts, has always opted for the road less taken. When she decided to go ahead and have superstar West Indian cricketer Viv Richards’s baby out of wedlock, back in 1989, she sent shockwaves across India. But, she went ahead regardless. She has stayed unapologetic and calm despite all the criticism, only admitting, “It was a selfish act on my part.’’ Today, she is her talented daughter’s quiet and faithful supporter, sportingly wearing her designs to fashion events, and standing by her. The night we met, she was looking ravishing in a blood red, jungle-themed Masaba sari. The essential Neena remains unchanged over the many years I have known her. I recall a fascinating conversation I had with her on a Mumbai-Delhi flight, ten years ago or so. She had recently married a charming businessman (Vivek Mehra) she had met accidentally. Neena spoke about her new husband with humour and pride, and thankfully, everything seems to have worked out for them, going by public posts and pictures. Perhaps, he has provided the much-needed stability Neena needed after years of struggling to raise Masaba as a single parent. Those years could not have been easy, given the jibes and taunts faced by mother and daughter. As she once told me that her own father moved in with them to provide the emotional support both required. Today, she is worried about Masaba’s future, after the collapse of her marriage to Madhu Mantena, a filmmaker. But trust Neena to be fair in her views, as she commented wistfully, “I wonder what went wrong. All of us really liked Madhu. We found him very sweet.” I hastily reassured her that these things happen and as far as Masaba is concerned, she is by far the most talented designer of her generation, who is being wooed by international brands.

Those of us of a certain vintage will recall Neena almost stealing the show from Madhuri Dixit in that naughty, tantalising song, Choli ke peeche kya hai… (Khalnayak, 1993). Neena really had it all—has it all. Today, at 60, she could still give ladies half her age serious competition. Neena laughs easily, which is always a great sign. And speaks spontaneously—an equally attractive trait. Neena gets my vote—for her talent, of course. But above all—for being a gutsy, modern woman who dared to script her own narrative sans regret.