Indira Jaising is first an old and affectionate friend, and a brilliant lawyer-activist next. I have known her and her husband, Anand Grover, for over 40 years. At the time we met and grew close, they were still quintessential Mumbaikars—they lived in Bandra, commuted to Fort, and hung out with like-minded folks who looked up to them for their exemplary work. From fighting for the rights of the city’s homeless pavement dwellers to representing the victims of the horrific Bhopal gas tragedy, they were out there, tirelessly and fearlessly taking on the mighty, armed with their impeccable credentials and formidable reputations. Thanks to their pioneering efforts in forming landmark laws against domestic violence, discriminatory practices against HIV patients and much more, both were given due recognition in India and internationally decades ago. Indira, the first woman to be appointed additional solicitor general (2009), is a Padma Shri recipient and was ranked 20 in Fortune magazine’s 2018 ranking of the World’s Greatest Leaders, while Anand is recognised globally for his commitment to protecting human rights. I guess none of this counts with the present administration. 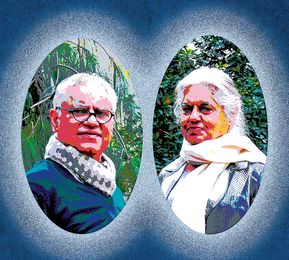 An FIR was lodged against the dynamic couple by the CBI in June for alleged violation of the Foreign Contribution (Regulation) Act. The Lawyers Collective, their NGO, is under fire. This came after the raids in 2016, when their premises were inspected and documents seized. The sudden raid this time, therefore, comes as a shock to those who respect the consistent and long-term efforts put in by them over the years, challenging all that is rotten in the system. I guess that is where the problem lies. Fortunately, the Bar Association of India has issued a statement condemning the CBI raids, calling it “excessive, disproportionate and unjustified”. Those in the know describe these raids as “spiteful and retaliatory”. Indira, as we all know, had demanded a “due inquiry process” in the sexual harassment case against Chief Justice of India Ranjan Gogoi.

The thing is, harassing those “engaged in constitutionally protected activities of advancing human rights and upholding the rule of law’’, as BAI points out, is one more way to shut down dissent in any form. It is a good thing Indira and Anand have succeeded in mobilising support by initiating an international petition that aims to generate thousands of signatures before August 15. I am not sure how effective such a campaign is likely to be, given that most citizens are nervously waiting and watching Narendra Modi’s new government after the incredible mandate that gives him and his team sweeping powers. The home ministry seems determined to send out a strong message to individuals like Indira and Anand: suspend your activism, or face the consequences. Knowing the stuff both are made of, I am certain they will fight back ferociously. But what can individuals do by themselves against a state that wields a big stick to threaten those who speak up? Frankly, a lot! It is imperative to join this protest against oppressive measures, designed to instil fear and silence those who dare to talk truth to power.

For me, Indira and Anand will remain the gutsy Mumbaikars who boldly put themselves on the line. Those days, I used to visit their cramped office, teeming with poor complainants pinning all their hopes on a group of idealistic lawyers who worked long hours filing cases pro bono on their behalf. These are priceless blessings from the voiceless. And, what happens down the line as Indira and Anand soldier on will impact not just the future of the Lawyers Collective, but our future as citizens in a democracy. I want them to know that they are not alone in this fight. Justice will prevail in the end. Nobody is asking for anything more.