How Shahid and the other Kapoors are refreshingly regular

Actor Shahid Kapoor’s quiet dignity and confidence make him stand out in an industry that encourages flamboyance and OTT conduct. From the start of a career that has been marked with critical and commercial success, Shahid has held his own against colleagues who were taller, brawnier, better looking, and yes, compulsive attention-seekers. For instance, he did not book a grand villa on Lake Como for his wedding, nor plaster every tiny detail of the pre- and post-ceremony on social media platforms. He chose a private, family celebration and a bride who was not from the film industry. It was as close to an arranged marriage as you can get! Mira Rajput (14 years his junior)—the lovely, fresh faced young girl who became Mrs Kapoor and shifted sans fuss to Mumbai—obviously took her cues from her husband, and maintained a low profile, while adjusting to life in a manic metro. Soon, they had a gorgeous little girl, followed by a baby boy. Through all these personal developments, Shahid continued to make his mark in films. Some worked, some did not. It was when his latest Kabir Singh (a remake of Telugu hit Arjun Reddy) created a national debate on misogyny, that Shahid attracted a fresh round of attention. After a controversial start, the film has crossed the magic Rs100 crore box office mark, and it is safe to conclude that Shahid will be in the running for top acting awards in 2019. 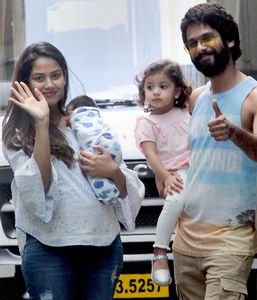 I refused to watch the film after reading about its content. But I figured it was my prerogative. When I tweeted my view, it led to an avalanche of mixed comments.This column is not about the movie or Shahid’s character in the film. It is about Shahid. And what I have observed over the years. Shahid’s father, Pankaj Kapoor, is a contemporary. He is one of our most talented actors (watch him in Maqbool—brilliant!). He is also an admirably low-key person; you would not recognise him if he were seated across the aisle from you on a flight! As I did not. All I noticed was a loving grandpa, keeping an eye on a gorgeous, restless granddaughter, who was running up and down the aisle, happily engaging with strangers. It was only after a few passengers started clicking the kid, that I discovered her parents! There they were—Shahid and Mira, just another young and good looking couple, returning to Mumbai from Chandigarh, after visiting Mira’s family. No bodyguards. No entourage. No fuss. No uniformed nanny. Just a regular ‘didi’ seated a row behind them. How refreshing! Shahid leaned across the aisle and offered me home-cooked aloo parathas, neatly wrapped in foil. We got chatting. And the time just flew by as both he and Mira spoke animatedly about their lives and the choices they jointly made. I could have been talking to any successful couple, making plans for the future. She mentioned they were planning an addition to the family—it was stated most naturally. He talked about his role in Padmaavat and his forthcoming projects. We also gossiped (a little!) and laughed at the ludicrousness of showbiz. Unlike a lot of Bollywood stars whose eyes glaze over the minute the topic shifts from them and their amazing selves, Shahid talked about so many developments—in the business and political spheres. Both of them were engaged and engaging, which again, came as a delightful revelation. Movie stars across the world are nauseatingly narcissistic. Their world view begins and ends with their latest triumphs.

The Kapoors behave like regular folks, because that is how they have been raised. I recalled spending a few days at Ananda In The Himalayas, and noticing a cute, young boy on the premises, whose head was always inside a big, fat book, even during meals! He was polite and courteous with waiting staff, but preferred to be left alone. It was on my last day there that I was told it was Shahid’s half-brother Ishaan Khattar, who had just made a terrific debut to great reviews in Beyond the Clouds.