Here’s a quick recap for readers who may not be familiar with Ruchir Sharma’s byline and books. A highly successful New York-based investment banker, Ruchir runs a $20 billion-plus fund (Morgan Stanley), but his heart goes dhak-dhak for the country of his birth. For the past 25 of his 45 years, he has made it his mission to track the chaotic, dramatic but totally spellbinding process of the Indian elections. His latest book, Democracy On The Road, chronicles in marvellous detail all that was observed and experienced by his 20 high-powered fellow travellers as they trundled through the land, meeting farmers and leaders, eccentrics and godmen. This was Ruchir’s 28th road trip with more or less the same group that has stuck it out in conditions that are anything but luxurious at times. Never mind that the group has been dubbed the ‘Limousine Liberals’ by critics!

During his book tour in India, one of his pit stops was Mumbai, where Anil Dharker, founder of Literature Live, had organised an ‘In Conversation’ between Ruchir and myself. I had about a zillion questions for the articulate author, having devoured his page-turner of a tome in one go. I told him the book read like a thriller. Has he already pitched it as a web series to Amazon Prime? Netflix? Ruchir blushed a little, but avoided a straight ‘Yes’ or ‘No’. He preferred to stick to his script and take the audience through his sharp and acute political comments in the book. Despite sensing his reluctance, I stubbornly soldiered on, hoping to crack Ruchir’s resistance to take our talk outside his book. 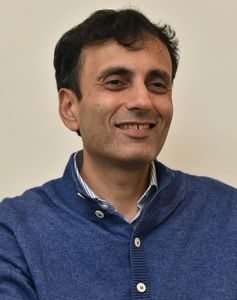 Given his high intelligence and easy charm, Ruchir, who is a sprinter, and a film and wildlife buff, has a fascinating ‘back story’. Babuji, his maternal grandfather, was a famous defence criminal lawyer and landlord in Bijnor. The book begins with an insightful family history, which explains Ruchir’s deep and abiding interest in India and its political landscape. Ruchir attended his first political rally at age five, when Indira Gandhi came campaigning to Bijnor, attracting thousands of folks. Ruchir says he has noticed that many a time villagers flock to these rallies only to gawk at a helicopter landing! It holds true even today.

Well, that Boy from Bijnor is now on the world stage, with a column in The New York Times and international publishers clamouring to grab his next title. Ruchir writes that he likes the “family feel” of desi politics, and is always overwhelmed by the warmth and hospitality of strangers as they host lavish feasts for his caravan during their halts. I wonder if those same strangers would extend this generosity to a band of non-entities; Ruchir’s group has well-known personalities like Prannoy Roy. Ruchir, who features on important lists like ‘Top 100 Global Thinkers’, is modest and low-key, besides being a great listener. He doesn’t miss a trick, which I noticed at the small dinner we hosted at our home for him after the event. He was attentive and keen to converse with all the guests, often bending low so as not to miss a line or a word. These traits are incredibly valuable while maintaining detailed notes on road trips. His encounters with Mayawati, ‘Captain’ Vijayakanth, Sonia Gandhi, Vasundhara Raje and other colourful characters make the complex political process and crazy local dynamics come vividly alive. His cross references to history also add the much-needed perspective to contemporary socio-economic-political-cultural-religious developments over the past 72 years of India’s independence. The book ends on an upbeat note: “.... in an era when democracy is said to be in retreat worldwide, it is thriving in India.”

Thank you for your optimism, Ruchir Sharma. I can only wistfully add: I wish!