I first met Sonali Bendre when she was a fresh faced, lissome ‘next-big-thing’ in Bollywood. We connected immediately. It was such a relief being able to converse with someone in Marathi! Sonali fit into the category of a ‘Maharashtrian beauty’. It was a description I had heard my father use for young ladies who exuded a specific sort of allure—natural, un-self-conscious, and fine-featured. Sonali was all that and more. She was exuberant without being fake, and her laughter sounded genuine. Over the years, we would meet at functions big and small… and chat animatedly. Along the way, Sonali married Goldie Behl, a good-natured, loving filmmaker. Soon, a son was born. Her career took a backseat as she focused on her family and began to explore other areas of her life. She was seen as a judge on reality shows, fabulously presented in stylish gowns, her make-up impeccable, her mannerisms friendly, but not over familiar. Her followers and fans supported all her ventures, as Sonali launched a popular digital book club in 2017. It was a great platform, and Sonali made the most of it, sharing her views on new books, recommending new titles and staying engaged with the audience at all times. 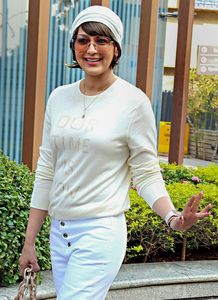 Last July, Sonali announced something that shook up her world. And ours. “Life throws you a curve ball when you least expect it…” read her post. Sonali had been detected with high grade metastatic cancer. Her chances for survival were a low 30 per cent. It was hard to believe that a beautiful, young woman with so much ahead of her was struck down by the dreaded Big C. What did Sonali do next? She decided that she was going to face her challenge with a smile and share the experience with her followers without camouflaging anything. She declared bravely, “I am taking the battle head on…” It was a brave and wise decision. We were ‘with her’ in spirit all the way…. while her close-knit coterie of friends made frequent trips to New York to bolster her spirits and show their love for her. Through the ordeal, it was Sonali making light of it and displaying candid pictures that documented every major step—like the time she had to chop off her lustrous hair and go bald during her chemotherapy treatment. Not only did she post pictures of herself getting tonsured, but also asked her fans for advice while selecting suitable wigs.

Sonali is back in Mumbai. And I met her at the recent Akash Ambani wedding. She was looking resplendent in a heavily embroidered, burgundy designer outfit. Her open trademark smile was as charming as before. She was being warmly greeted by old friends and complete strangers, as she stood with a beaming Goldie, graciously accepting the compliments and attention. She currently wears her hair in a stylish short crop which suits her face. I asked her about her immediate plans and she said she was staying put in Mumbai, not rushing to New York. We agreed some of the best oncologists in the world are right here in India.

Sonali is in good hands. And may she go from strength to strength—our precious New Year baby (her birthday falls on January 1). Perhaps, without her realising it, she has touched millions of lives. It is her positive take on coping—not just with cancer, but all that goes with triumphing over it—that has made her a superhero. The picture she posted after she got dressed for the big Ambani wedding sums up her ‘never say die’ attitude. Sonali captioned her post jauntily by stating, “It has been a while since I got out of my track pants…” Well, my dear, whether clad in casual tracks or in dazzling designer gear, it is your radiance that lights up the space you occupy and all of us are more than happy to bask in its after-glow.