Ranveer, one of a kind!

For sure, 2018 was the year of the wink. First it was Rahul Gandhi who teased and tantalised India with the sly, conspiratorial wink in Parliament. And to end this dramatic year on a high note, let us hand the wink-trophy to actor Ranveer Singh, whose chart-busting track, Aankh Maarey from Simmba, is playing in the most popular clubs worldwide. It is the perfect “wink-wink” song to launch 2019 in style. Happy new year, readers!

As we speak, the newly-minted bridegroom is honeymooning with his beautiful bride at a secret destination. Ranveer-Deepika have kicked off 2019 on a jaunty note with the super success of Simmba, and the grand production that was their marriage. I ran into the couple soon after their shaadi, at the “other” wedding of the century. You know which one (wink-wink!). 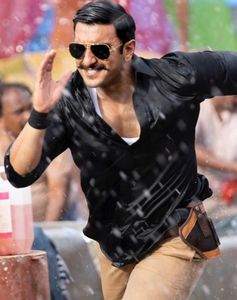 Ranveer resembled an ecstatic schoolboy who had just been declared the prom king. I asked them to pose for me and they sportingly obliged with Ranveer declaring, “Come on, we are actors. What do you want us to do?” Once I was done, I showed him the pictures and asked him to pick the one he liked. His response: “Pick the one in which she looks the best... and is laughing. I love her laugh.” My word, besotted! Over the moon… as if he cannot quite believe his good fortune in having bagged his co-star of super-hits like Ram-Leela, Bajirao Mastani and Padmaavat. Certainly, their chemistry on screen has always been unmissable. But I can recall so many occasions when I ran into them, with Ranveer being entirely natural and exuberant around his lady-love, frequently kissing her neck and hands, while Deepika displayed far more restraint.

Ranveer Singh’s career has been extraordinary, starting with his very first film in 2010 with Anushka Sharma (Band Baaja Baaraat). They were dating at the time, and I found myself seated right behind them on a flight to Bengaluru. His PDA, even then, was unabashed and spontaneous. Compared to the self-conscious, stiff posturing of his seniors, Ranveer comes across like an egoless, natural “everyman”. I have watched him greet pesky fans and interact with junior production chaps without ever making them feel like he was doing them a favour.

With his crazy antics and crazier wardrobe, he is a compulsive attention-seeker, eager to please the audience. I find this a very endearing trait in a movie star of his status and calibre. He has the smarts, and is never at a loss for words. These are unrehearsed, unscripted exchanges, and they always come as a surprise. We expect our stars to be narcissistic. By contrast, Ranveer is sharp and well-informed. His native intelligence also shows through in his nuanced performances on screen. He can go from being a rough-and-tough street bully (Gunday) to a feared and respected peshwa (Bajirao Mastani).

I would be most interested in seeing him portray Devdas. I feel Ranveer’s potential as an actor-of-depth remains untapped, and would provide rich raw material for a fresh take on the classic. His mind is an original, and with a smart, wealthy and talented woman by his side, Ranveer is poised to become one of the biggest superstars India has ever seen. As a couple, they engage with audiences most effortlessly. If they pick their movies well, they could join the ranks of Hollywood greats who created onscreen magic, and off-screen couple goals.

As of now, all it took was a wink from Ranveer Singh playing a corrupt cop in Simmba to eat up the box-office at the end of a year that was pretty mixed for Bollywood. The three Khans need to worry.