Forget the other two mega Bollywood weddings for now. Fans have finished OD-ing on those. Every tiny detail has been greedily devoured and regurgitated. There is collective shaadi-induced indigestion in India at present. But the forthcoming wedding of one of our most unusual women is bound to take social media by storm as and when it does take place (it is scheduled for December 31 in Los Angeles). For those who are wondering what makes Rakhi Sawant so unique, let me just say I have followed her eventful life for over a decade. I have yet to meet someone like her. She is so dramatically different from ‘normal’ folks, it makes me wonder: Is she plain insane… or super smart?

The last time we ran into each other was at Kolkata airport where Rakhi had gone to collect her visa for America. She was busy posing for selfies with the security staff when she spotted me. We promptly hugged and kissed and started speaking excitedly in our native Marathi. On the long flight back to Mumbai, I caught up with the many bizarre developments in her crowded life. She showed me her Instagram posts with justifiable pride (507k followers at last count). 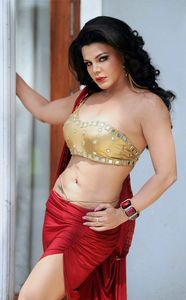 Rakhi is indeed indefatigable, as she updates posts by the minute, sometimes making sense, but most times not. In her many outlandish get ups and even more outlandish utterances, she sends fans into an absolute tizzy, as she graphically demonstrated how to wear a chastity belt during the #MeToo controversy. “My body is my temple…,” she routinely purrs, as she discusses flavoured condoms.

Well, Rakhi, certainly, seems to have met her comic match in someone called Deepak Kalal, a cross-dressing You-Tuber and blogger who was noticed during the eight season of India’s Got Talent. According to his CV, he used to be a hotel receptionist till he acquired a sizeable following in Pakistan and India after posting videos on Kashmir. Amazingly enough, his father was an engineer with the Mumbai Municipal Corporation. Both his parents frequently feature on his videos.

In a ridiculously staged press conference about the forthcoming nuptials, Kalal crassly told reporters about Rakhi’s virginity, which he had had tested and confirmed twice over by a doctor. All the while, Rakhi, head demurely covered, simpered next to him, before putting a mangalsutra around his neck. The wedding announcement is perfectly timed to get extra social media exposure while Bollywood groupies are still swooning over the other mega star weddings. That is the essential Rakhi—a brazen, out there social media creation, much like the Kardashians in Hollywood.

During the course of our flight, she leaned over conspiratorially, and in her best ‘sistaah’ voice, told me to look at her chest. I did as told. “I have removed my implants,” she confessed, “See… my boobs are gone. They are what sell. I know that. But health comes first. I will put them in again after a few months of rest.” Candid and upfront. Just like that. Which is why I like her.

Before a hasty ‘goodbye’ while still on the aircraft, she shot a quick video, in which she said she was thinking of kidnapping me. It was at the time when journalists were indeed being kidnapped, even killed. I warned her not to be silly. It could land her… and me… in a mess. Rakhi laughed. Perhaps that was the whole idea! A dramatic arrest at the airport as we stepped out? She is so much fun. Honestly speaking, I would rather spend an evening with Rakhi Sawant, watching her antics, listening to her mad cap stories, and cracking up with each anecdote, than with a bunch of unoriginal, predictable, boring, pompous VVIPs—from any sector! Rakhi is her own woman. She works hard. She breaks rules. She is a disruptor. What’s there not to like?