The biggest star of the just concluded Himalayan Echoes literature festival (third edition) in Nainital was the articulate, dynamic and dishy Lobsang Sangay, elected president of the Tibetan-government-in-exile. Inviting him to the festival was indeed an inspired idea—good work, Janhavi Prasada (director of the festival). During her opening remarks, Prasada introduced the man, whose name means “kind-hearted lion”; the same man was once called a “hopeless son” by his father. Today, he is a globally sought after leader passionately articulating the cause of his people.

At 50, Sangay cuts a dashing figure. Impeccably and fashionably attired, the Harvard-educated human rights law expert speaks his mind with clarity and fluency, especially when he describes the plight of his fellow Tibetans. He talked about his childhood in Darjeeling, where he was born to refugee parents, and sold sweaters to make ends meet. Despite the early hardships, he managed to win scholarships and come up the hard way. As the political spokesperson for Tibetans, he has an enormous responsibility on his hands. He says he gets all the guidance from the spiritual leader, the venerated Dalai Lama, who has anointed him the sikyong (ruler or regent). It is a role he takes most seriously, as was obvious when our flight from Delhi landed in Pantnagar and a contingent of local Tibetans rushed to greet him and seek blessings. 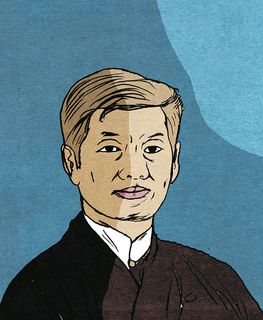 At the festival, he was relaxed and charming, frequently cracking jokes at his own expense. During a conversation with author Patrick French, who has visited Tibet more than once and written about it, the sikyong reeled off several anecdotes of his many travels, narrating how many times important meetings at government levels were cancelled at the last minute because of pressure brought on organisers by the Chinese. His message of peace and non-violence translating into the eventual goal—Tibet for Tibetans—is delivered firmly with admirable determination. He talked about patience being the key attribute, one which Buddhism preaches and propagates. He cited examples of the Berlin Wall coming down when nobody expected such a development to ever take place. He mentioned the break-up of the Soviet Union, and stated that a similar turning point would come for Tibetans, too.

Listening to him in rapt attention were several prominent citizens of Nainital. Given the festival’s emphasis on the environment, ecological issues and the furthering of cultural arts and crafts of the region, the venue was appropriately festooned with Tibetan prayer flags and dotted with stalls showcasing local, artisanal produce.

Driving to the ever popular China Peak (aka Naina Peak), which is a popular place for trekking and camping, I thought of the irony of the name given by the British to the picturesque site. Here was Sangay informing us about the many injustices Tibetans faced at the hands of Chinese oppressors, and here we were, enjoying the salubrious climate and making plans to visit China Peak on our next trip! I want to suggest a name change to Prasada—why not lobby with local supporters and rename the popular picnic spot? Why China or Naina Peak? Why not Tibet Peak? That would please Sangay. He could be invited back to Himalayan Echoes with his wife and three-year-old daughter. Who knows, anything is possible, like he said. Tibet may yet reclaim its freedom. Till then, a strong, independent and distinct identity will have to do!