Our man in Tokyo

No prime minister of Japan has ever made anywhere near the impression on Indian public opinion as Shinzo Abe did. It was not just that he is the longest serving prime minister in Japan’s history since the Meiji Restoration of the late 19th century. Never have millions of Indians had the opportunity to see a Japanese prime minister for an entire evening watching the glorious ceremony of the Ganga Arati at Varanasi’s Dashashwamedh Ghat. As he steps down from office this month, after a tenure of over nine years, Abe will be wished well by a people that have come to appreciate his abiding commitment to Japan-India friendship.

Over the past quarter century Japan has had 17 prime ministers. Of them, eight served terms of less than a year and most others of less than two. Only Junichiro Koizumi enjoyed a decent tenure of five years in office. Into that office with a revolving door that was constantly spinning around Abe stepped in first in September 2007. However, ill-health made him step down a year later. Over the next five years Japan had five prime ministers, of uneven competence. Abe returned to office in December 2012 to become Japan’s longest serving prime minister. 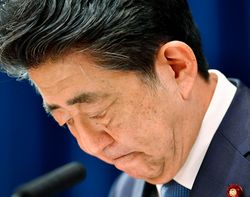 Even in that brief first year in office Abe left a mark as far as Japan-India relations are concerned. Addressing the Indian Parliament in August 2007, Abe enunciated the now popular and widely recognised idea of an Indo-Pacific geopolitical space. Giving his address the title of a book by the Mughal prince Dara Shikoh—A Confluence of the Two Seas—Abe spoke of the historic, cultural, economic and geopolitical links between the Pacific and the Indian Ocean. Abe’s successors in the period 2007-2012 did not follow up on that idea and many have come to associate it with Hillary Clinton who, as United States secretary of state, spoke about the Indo-Pacific to a gathering in Chennai in 2011.

It was on his return to office in 2012 that Abe gave concrete shape to his ideas and has since laid the firm foundation of India’s probably most consequential bilateral relationship. Indians may be divided in their views on the country’s relations with the United States, Russia, Europe and even China. But there would now be universal agreement that Japan is an important partner country for India. Abe deserves all the credit for shaping that view. Which is why Indian diplomats will watch closely who his successor is going to be, and whether he would remain loyal to Abe’s vision of Japan-India relations.

There is good reason for India remaining wary till the new prime minister unveils his vision for the bilateral relationship. Within the Japanese elite—its business class, political leadership, intellectuals and diplomats—there is an influential pro-China lobby of individuals and companies that have made their millions and billions in China. In 2007, when Abe stepped down, his first successor Yasuo Fukuda did an about-turn on India and cozied up to China. However, since then Xi Jinping has happened!

While Japanese business, like most business, remains frustrated with the “unease of doing business” in India, the economic relationship has become stronger. More importantly, the defence, technological and people-to-people relationship has also grown stronger. The Quad—a new strategic foursome of Australia, India, Japan and the US in the Indo-Pacific region—is acquiring greater relevance and profile thanks to the unrelenting assertiveness of Xi’s China. India’s political leadership would want an early affirmation by the new Japanese prime minister of his commitment to the Abe vision of a confluence of values and interests between Asia’s great democracies.