On Christmas Day Atal Bihari Vajpayee would have been 95. Will the India that celebrates Atalji’s centenary five years hence be the India that he would have felt comfortable living in? The answer to that lies in the manner in which Prime Minister Narendra Modi responds to the many concerns of many citizens being expressed in many ways as this year comes to a close.

I was still in my teens when I first heard Atalji address a public meeting in the Vivek Vardhini College grounds in Hyderabad. I regarded myself a communist at the time and so was not impressed by his views, but I was mesmerised by his oratory. Years later, I first met Atalji in the stately rooms of New Delhi’s Hyderabad House. Prime Minister P.V. Narasimha Rao was hosting a dinner in honour of the visiting heads of government of the Group of 15—a like-minded group within the Non-Aligned Movement. Rao caught me and a couple of others laughing heartily as Atalji spoke to us, while waiting to move to the dining room. The prime minister walked up to us, leaving the other G-15 leaders behind, and inquired conspiratorially: “What is Atal telling you?” Atalji laughed heartily and replied: “Don’t worry, I am not saying anything that should worry you.” 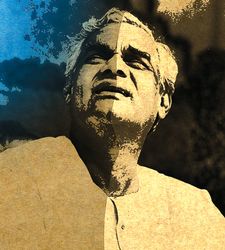 Like everyone who came in contact with him, I, too, was truly impressed by Atalji’s wit and charm. He endeared himself to all his interlocutors and to multitude of the Indian people. When he passed away, the entire nation mourned a true nationalist—one who united India. There is much that the present leadership of the Bharatiya Janata Party must learn from his example. Atalji may not have returned to power in 2004, but he firmly embedded himself in the hearts and minds of a large majority of Indians of all faiths.

The poet Oliver Goldsmith wrote of The Village Preacher: “Truth from his lips prevailed with double sway; and fools, who came to scoff, remained to pray.” Much the same could be said for Atalji. Ironically though, towards the end of his tenure in office, Atalji was scoffed more within his own political movement than by his critics outside. He was mocked as a mask covering the real face of his party. Attempts were made to unseat him on the grounds that his health had been failing. He was criticised for not pulling up errant ministers, for allowing those close to him, from the late Pramod Mahajan to his family members, to misuse their positions of power and influence, and he was bullied by the BJP’s allies from Bal Thackeray to N. Chandrababu Naidu.

Despite all his faults and foibles, one can say of Atalji what Goldsmith said of the Village Preacher: “His ready smile a parent’s warmth expressed/ Their welfare pleased him, and their cares distressed./ To them his heart, his love, his griefs were given,/ But all his serious thoughts had rest in heaven.”

All great leaders are remembered not because they were powerful, but because they were caring. The most impressive tribute to any former president in the national capital of the United States is not to a leader who established American dominance over the world, but one who united his own people—Abraham Lincoln—fighting hate and prejudice.

In the difficult days through which the country is passing, with insecurity of different kinds—from livelihood to life, scholarship to citizenship— gripping so many, there is much that Prime Minister Modi can learn from the qualities of Atalji’s head and heart in keeping the trust and confidence of all citizens.