Former Prime Minister Manmohan Singh advised his successor, Prime Minister Narendra Modi, to listen to ‘sane voices’ on the economy to be able to restore confidence in the government’s macroeconomic policies and policymaking. For a prime minister there is probably no one better to turn to for sane and sage advice on statecraft than Kautilya aka Chanakya.

In Arthashastra, perhaps the greatest of the ancient texts on statecraft and political economy, Kautilya advises the king to be “ever active in the management of the economy, without which both current prosperity and future growth will be destroyed”. A strong and vibrant economy, Kautilya repeatedly asserted, is the foundation of a powerful and successful state. Indeed, he went on to say that it is from the “strength of the treasury” that an army derives its strength. By the word ‘treasury’ Kautilya was not referring only to the ‘fisc’, but to the state’s fiscal and economic capacity as a whole. Kautilya believed it is the king’s job to manage the economy. 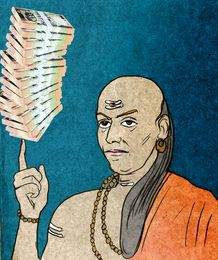 There are many reasons why the prime minister must place the revival of economic growth on top of his personal list of priorities for the rest of the year. Nothing else literally matters. Returning to the long-term trajectory of around 7.0 per cent annual rate of national income growth would have several positive outcomes. It would improve government finances. It would generate new incomes and new jobs. It would set into motion the ‘virtuous cycle’ of investment-led growth that the Union finance ministry’s annual Economic Survey offered as a panacea for all ills. Above all, it would revive the ‘India Story’ that has driven investment and growth over the past decade.

The ‘India Story’ was based on four numbers. For the first half of the 20th century, the economy of the Indian subcontinent as a whole grew at just over zero per cent per annum. From 1950 to 1980, national income grew at an annual average growth rate of 3.5 per cent. This went up to 5.5 per cent between 1980 and 2000. From the turn of the century, the rate of growth began to accelerate, touching close to 9.0 per cent per annum during Manmohan Singh’s first term in office. After 2012, the downturn began but the ‘India Story’ was kept alive by the fact that even at a lower rate of growth of over 7.0 per cent India was still the ‘world’s fastest growing large economy’.

These simple but hard economic facts formed the basis of fundamental geopolitical reassessments of India around the world. The first off the ground was former United States secretary of state Condoleezza Rice who wrote an essay in 2001 urging the US leadership to stop thinking of India as a neighbour of Pakistan and to start thinking of India as a neighbour of China. Rising India was increasing its economic distance from Pakistan and closing up to China. This narrative helped India avoid the 1990-1991 kind of sentiment-based economic crisis even in times of trouble, as after 2008-2009.

Investment is a sentimental act, whatever the number-crunching, model-building economists may say. The positive narrative about India shaped investor sentiment. The same way today a new negative narrative about India has begun to take shape and that is dampening investor sentiment. Despite his impressive electoral victory, Modi is not being viewed as someone who is on top of a difficult situation. Timely and credible communication is an important instrument of economic policy making. Former prime minister P.V. Narasimha Rao understood that when he went on Doordarshan and addressed the nation in May 1991 and then went about unveiling dramatic policy correctives that altered sentiment within a month. Rest is history.