Back to bucket baths to save water

Even as the monsoon lashes the western coast, it has been reported that more than 40 per cent of the country is facing severe drought. The problem of simultaneously dealing with floods and drought in different parts of the country is an annual challenge for the government. The decision of Prime Minister Narendra Modi to appoint a cabinet minister for Jal Shakti came in a week when it was also reported that 21 Indian cities, including Delhi, will run out of groundwater by 2020, affecting a hundred million people.

Against this background, any effort to raise water use consciousness ought to be welcomed. So, I heartily applaud the local authorities in Gurugram for fining cricketer Virat Kohli for using drinking water to wash his car. Regrettably, the fine was a measly Rs500. 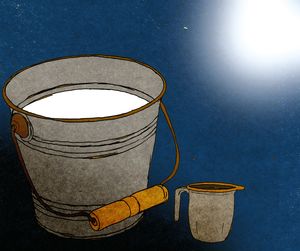 My generation grew up with greater water use consciousness even when water was not as scarce as it is now. Just as we were taught to switch off the lights and fan while leaving a room, we were taught to use water with care. Having bucket baths was one way of conserving water. Today, it is no longer regarded fashionable to have bucket baths. While shower baths have become more common, western-style bath tubs are back in vogue and, in many upmarket homes, one even encounters a jacuzzi!

The Indian practice of bucket baths received an interesting European endorsement way back in the 1970s when the celebrated European journalist Victor Zorza devoted one of his highly regarded and widely read columns, published in the Manchester Guardian and Le Monde, to the experience of taking a bucket bath. Take a can or a mug in your hand, I recall his writing, splash water over your left shoulder and then your right, over your head if you wish to, splash again on your torso and your back, splash a couple of mugs of water on each leg. Rub soap over yourself and repeat the splashing of water with the mug. It takes just one bucket for a good wash, Zorza told his European tub-soaking audience.

If there is one lesson that urban India can learn from the city-state of Singapore, it is about water conservation and re-use. Singapore’s population has increased several fold in the past two decades and yet it has been able to provide adequate drinking water to all its citizens. Of the many things Singapore does, the most doable in India is rainwater harvesting. India has a standing example, in Fatehpur Sikri, of what lack of water can do to life. That story ought to haunt every urban Indian who has invested one’s life’s saving in a home.

The challenge of revitalising groundwater through rejuvenation of water tanks has received policy attention for some time now, but much more needs to be done to put this programme into mission mode across the country. Hopefully, the new minister for Jal Shakti will address this challenge better than his predecessors.

It is in the very nature of the subcontinent’s ecology that the government has been required to play a key role in water management. Historian Karl Wittfogel wrote famously about ‘hydraulic societies’, wherein the state was required to mobilise the resources required to provide large-scale irrigation systems necessary for sustained agriculture. The state in India has played that role both by constructing and maintaining large-scale irrigation systems and by building local water tanks. Water harvesting, too, requires state intervention. But, above all, the state needs to step in to raise public consciousness regarding water scarcity. Fining Kohli for wasteful use of drinking water was a laudable act of state intervention.