While many ‘helicopter’ and ‘limousine’ journalists from New Delhi returned from Hyderabad to predict the defeat of TRS, I had consistently held that the father-son duo—K. Chandrashekar Rao (KCR) and K.T. Rama Rao (KTR)—would return to power in the state. I have won all my bets. The reason for my forecasting a TRS victory in Telangana was simple—there was really no strong anti-incumbency element in Telangana and most people in rural and urban areas have credited TRS with ensuring both power and water supply. Life in the state has been normal. Finally, in the greater Hyderabad region, KTR managed to win over urban support, among the locals and the so-called “settlers”, by reassuring them that the city would continue to be open to all, hospitable to all. 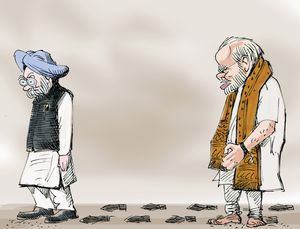 What portents does this week’s verdict have for the 2019 Lok Sabha elections? The Sonia Congress has come out of the long shadow of the 2014 defeat and found its voice, recovered its gait. What this means for the so-called Mahagathbandhan remains to be seen. The BJP is on the back foot. The magic of Narendra Modi and the tactics of Amit Shah seem to have run their course. The BJP needs a new narrative to recover support among the youth, scheduled castes and tribes. The non-BJP, non-Congress parties, including the TRS, the Trinamool Congress, the Biju Janata Dal, the YSR Congress, the Bahujan Samaj Party, the Samajwadi Party and the Nationalist Congress Party may explore new spaces available to them. All in all, the 2019 game is wide open.

What lessons must the BJP learn from this verdict? Remember a plea that Modi made to his own party and the opposition in 2014—‘Give me ten years of stability, away from the politics of divisiveness and watch us take India forward.’ His party wasted the opportunity by allowing the politics of instability and divisiveness to take root. Modi belied expectations generated by his slogan—‘Less government, more governance’. Can he take the focus firmly back to issues of development and governance in the next few months?

With the benefit of hindsight one can say that the verdicts of Lok Sabha elections in 2004 and 2014 were both the outcome of anti-incumbency. It was only in 2009 that a pro-incumbent sentiment gave Manmohan Singh his second term. I have analysed the basis of the pro-incumbency mandate of 2009, and how the credit was denied to Singh, in my book The Accidental Prime Minister: The Making and Unmaking of Manmohan Singh. The fact is that even six months before the 2009 elections, in the aftermath of the Mumbai terror attack in November 2008, no one imagined that Singh would deliver a second term to the Congress. He did so with his quiet assertion on the nuclear deal and in the manner in which he dealt with Pakistan.