Is the BJP’s stance on corruption contradictory, asks Sachidananda Murthy

Many political parties have disciplinary action committees to deal with complaints against members, including office-bearers and ministers. Barring the CPI(M), which has an active control commission, the mechanism in other parties either moves at a snail’s pace or is at a standstill.

The Bharatiya Janata Party has been vocal about its government’s zero-tolerance policy against corruption. The government, which declared a war on black money when Narendra Modi first took oath in 2014, has pursued cases against opposition leaders, including chief ministers and ministers, through the Central Bureau of Investigation and the Enforcement Directorate. Several investigations are based on corruption charges by the BJP, as its leaders have made documents and sting audiotapes on alleged corruption in West Bengal, Delhi and Maharashtra. 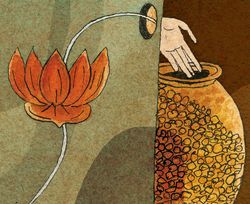 But the opposition has been crying that the government and the ruling party have been deliberately blind to the corruption scandals involving nominees of the Central government and ministers of BJP-ruled states. In the last few weeks, multiple charges have emerged against BJP ministers, functionaries and nominees. The latest is the ‘charge-sheet’ submitted by the Assam unit of the Congress against Chief Minister Himanta Biswa Sarma, who has been a minister for long. He is accused of amassing wealth through family members. Opposition leaders have filed a complaint with the CBI director. Sarma, an aggressive politician who was earlier with the Congress, has vehemently denied the charges that were earlier also made by the Aam Aadmi Party. He has now threatened legal action.

In Delhi, the AAP has fired a salvo against BJP nominee V.K. Saxena, the new lieutenant governor, alleging that he had indulged in corruption during his six-year tenure as chairman of Khadi and Village Industries Commission. He has been accused of favouring his daughter for the redesign of the Khadi lounge. But Saxena, who has fired off a legal notice, has said that his daughter did the consultancy as she had the experience and did not charge even a rupee. He has said that the AAP has heaped charges on him because he ordered a CBI inquiry against Delhi Deputy Chief Minister Manish Sisodia in the liquor policy scam.

Recently, the Madhya Pradesh accountant general found huge irregularities in the state nutrition programme. It was found that registration numbers of scooters were given as those of trucks carrying foodgrains and other material, which later vanished.

In Karnataka, the contractors association has been repeatedly alleging that the BJP regime of Basavaraj Bommai is a “40 per cent commission government”. A contractor committed suicide, claiming he had paid a huge bribe to K.S. Eshwarappa, who was in charge of rural development. Eshwarappa was forced to resign, but the Karnataka police closed the case for lack of evidence. Eshwarappa has been demanding reinstatement as minister, but the high command has not given the green signal so far.

Interestingly, none of these complaints have been taken seriously by the party nor referred to its disciplinary action committee. The corruption charges have been denied by the functionaries or the state units, with the high command maintaining the charges as fabricated by the opposition. In fact, the issues before the committee are regarding objectionable remarks made publicly by leaders like Karnataka BJP president Nalin Kumar Kateel and Telangana MLA T. Raja Singh. But the complaint against Kateel has been pending before the committee for two years. Singh, meanwhile, was suspended from the party, pending further inquiry.