Why K. Chandrashekar Rao’s move to unseat Modi is not working

KCR had been hopping from one state to another, meeting major regional party leaders

K. Chandrashekar Rao is an incorrigible optimist. The Telangana chief minister has made it a mission to forge a non-BJP, non-Congress national front for the last three years, though it has not had the desired outcome. Soon after the big flip-flop by Nitish Kumar, who dumped the BJP and tied up with the RJD and its minor allies in Bihar, Rao decided to meet Nitish to pursue his national agenda. He hopes that Nitish, a master in political gamesmanship, would agree to persuade other major regional parties to form an informal alliance to ‘Stop Modi in 2024’. Also, the assembly elections in Telangana could be held with the Lok Sabha elections, and the BJP is making an aggressive push in the state, which has been ruled by Rao since 2004.

Earlier, Rao had been hopping from one state to another to meet regional party leaders, including Uddhav Thackeray of the Shiv Sena in Maharashtra, Arvind Kejriwal of the Aam Aadmi Party in Delhi, M.K. Stalin of the Dravida Munnetra Kazhagam in Tamil Nadu and H.D. Deve Gowda of the Janata Dal (Secular) in Karnataka. He has been in touch with Mamata Banerjee of the Trinamool Congress in West Bengal, Akhilesh Yadav of the Samajwadi Party in Uttar Pradesh, Hemant Soren of the Jharkhand Mukti Morcha and Pinarayi Vijayan of the Communist Party of India (Marxist) in Kerala. Rao’s calculation is that these regional parties have a collective strength in nearly 300 Lok Sabha seats. He has, however, avoided the parties of neighbouring Andhra Pradesh—Chief Minister Y.S. Jagan Mohan Reddy’s YSR Congress and Chandrababu Naidu’s Telugu Desam Party—as both were opposed to carving out a separate Telangana. Any understanding with them would affect Rao’s support base, which has a visceral dislike for the duo. He has also not seriously pursued Naveen Patnaik of the Biju Janata Dal, who keeps aloof from any political discussion with other parties. 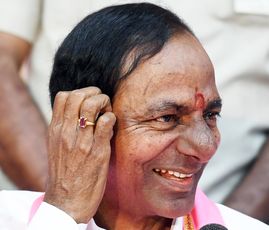 There are other weaknesses that hamper Rao’s outreach for a national regional alternative. As he comes from a comparatively smaller state with just 17 Lok Sabha seats, he is not in a position to influence voter preference in both larger and smaller states where regional parties are an important factor. Thus, many leaders approached by Rao have been nice to him personally, but have been noncommittal in giving any undertaking of even a post-poll alignment, let alone adjustments before elections. For instance, Mamata Banerjee had not taken Rao seriously when he had approached her ahead of the 2019 assembly polls in West Bengal. He wanted her in the forefront for her considerable experience, both in regional and national politics, and better acceptability in the fight against BJP.

Rao’s second flaw is his insistence on keeping the Congress out of the calculation, because it is a political rival in Telangana. Thus, any approach to the Congress would help the BJP in projecting itself as the only alternative force in the state. Even the state Congress is not keen on a tie-up with Rao’s Telangana Rashtra Samithi.

But some of the parties approached by Rao have the Congress as a junior partner. It is part of the alliance with the Shiv Sena and the Nationalist Congress Party in Maharashtra, a long-term ally of the DMK in Tamil Nadu and of the Rashtriya Janata Dal and, now Nitish, in Bihar and the JMM in Jharkhand. Rao’s desire to fight or at least ignore the Congress may not work with these parties, which benefit from whatever base the Congress has in the respective states. The CPI(M), too, has its own different perception of the Congress in states other than Kerala.

But Rao, who succeeded against all odds after decades of agitation to create Telangana, is an optimist, driven by his antipathy to Modi. But political reality makes his permutations and combinations feasible only if, in two years, people vote for a hung parliament, handing a drubbing to the BJP.