It's padayatra time for parties and Patras, says Sachidananda Murthy

The pandemic scare has died down, and political parties are now planning for yatras in a big way.

There were political rallies and long walks during the pandemic phase, too, but the Election Commission had put a lid on the holding of mega rallies during elections in Uttar Pradesh and other states this year. There were also complaints in many states against politicians violating the crowd norms fixed under the Disaster Management Act for preventing the spread of Covid-19.

But now, with the crowd limit being lifted in all states, planners are busy convincing their bosses to hit the road.

Union Home Minister Amit Shah is hopping from one election-bound state to another to secure the first-mover advantage for the BJP. He has just completed a day’s brainstorming in Gujarat, where he has told the party leaders that the next four months should see a surge in party activity. Among the plans is a state-wide yatra led by the low-profile Chief Minister Bhupendrabhai Patel, alongside local chieftains, so that the ground is prepared for high-profile campaigning by Prime Minister Narendra Modi. Shah has also been on several trips to Karnataka to pull the faction-ridden state unit together. He has told Himachal Pradesh Chief Minister Jai Ram Thakur to get the local morchas moving. Unlike earlier occasions, when the party avoided holding rallies during the monsoon, which would hit both Karnataka and Himachal Pradesh, the BJP wants to have outdoor activities during the rains this year—even though Karnataka elections are due only next year. 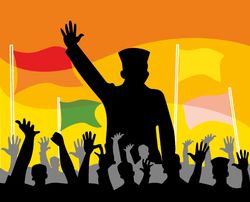 The Congress has decided that its make-or-break Kanyakumari to Kashmir padayatra would start on October 2, by which time the southwest monsoon would have retreated. The party wants its frontline leaders to get involved in the rally, which is an activity meant to charge up the cadres. But it is uncertain whether the Gandhi siblings would walk the full route. Congress leaders are planning state-level yatras also. The party faces tough tests in Rajasthan and Chhattisgarh—the only states where it is in power—and in Madhya Pradesh, where it lost the government to the BJP due to infighting and defections. In Karnataka, the Congress had been a junior coalition partner in the Janata Dal (Secular)-led government, but the BJP toppled the shaky government in 2018.

Meanwhile, Telugu Desam Party president N. Chandrababu Naidu, who is a veteran of many padayatras, is drawing up plans for a year-long journey through Andhra Pradesh in 2023 to wrest power from Y.S. Jagan Mohan Reddy, who himself used padayatra politics to beat Naidu in the 2019 assembly elections.

In neighbouring Telangana, the ruling Telangana Rashtra Samithi has been keenly watching the rallies of state BJP president Bandi Sanjay Kumar and state Congress president Revanth Reddy, as both have mobilised big crowds. Now, both are planning state-wide yatras in their bid to end the rule of chief minister K. Chandrashekar Rao, who has been at the helm since the formation of the state in 2014.

Apart from official programmes of parties decided at national and state levels, some politicians are launching their own yatras in their constituencies of interest. BJP national spokesperson Sambit Patra, who unsuccessfully contested the Lok Sabha elections from Puri in Odisha, has decided to return to the temple city to launch his campaign for the 2024 Lok Sabha elections. Similarly, for assembly elections in the next 12 months, ticket aspirants of national and regional parties have hit the ground running, even spending good sums without the certainty of a ticket!