Part of her long-term desire to make Trinamool a party of north, northeastern India

Shatrughan Sinha has returned to Parliament after a gap of three years. The star, who was one of the dominant voices in Hindi cinema from the 1970s to the 1990s, spent 12 years as Rajya Sabha member and 10 years as Lok Sabha member, all the time representing the BJP. But now he has entered the Lok Sabha as a Trinamool Congress member, winning the Asansol by-election. He replaced singer Babul Supriyo, who left the BJP to join the Trinamool and became an MLA in West Bengal. Sinha, 76, was still in demand both in public rallies and television programmes, and was often requested to repeat his signature one-word Hindi dialogue—Khamosh (silence)! He had a smooth ride in the stronghold of Trinamool chief Mamata Banerjee.

Within the BJP, Sinha was seen as a Vajpayee-Advani man, who failed to adjust to Narendra Modi’s style of functioning. Giving him company were two other Modi critics—Arun Shourie and Yashwant Sinha, both of whom were also ministers under Vajpayee. The trio was critical of the departure from the ‘Raj Dharma’ (political code) practised by Vajpayee. Many others from the Vajpayee cabinet like Arun Jaitley, Rajnath Singh, Venkaiah Naidu, Sushma Swaraj, Ravi Shankar Prasad and Ananth Kumar, however, made the smooth transition into the Modi era, getting important portfolios. But the actor, who had handled health and shipping portfolios under Vajpayee, was miffed at being ignored, a grouse he shared with Shourie and Yashwant. Even as he remained a member of the BJP, Sinha took swipes at Modi, though always in a polished language. Even after he was out of Parliament, Sinha would regularly tweet on the plight of the migrant workers who took to the highways during Covid-19 and also on the rising unemployment numbers. 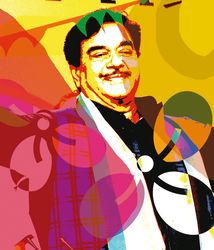 At present, a ruling party MP who raises such critical issues regularly about government policies in a dignified language is Varun Gandhi. Like it ignored Sinha, the ruling establishment has not responded to any of the criticisms from Varun, who became the youngest general secretary of the party before it came to power.

For a man who projected toughness on screen, Sinha even couches his critical messages in mild language. However, when Sinha praises leaders, as he did Rahul Gandhi during his brief sojourn in the Congress, he uses a lot of admiring words. During campaigning, he eschewed the harsh language normally used by Trinamool leaders against the BJP. Though there was criticism that he was an outsider from Bihar, Asansol, with its multilingual population, celebrated the veteran’s nomination. Supriyo’s supporters who had jumped to Trinamool en masse also worked hard for the actor.

There are several reasons being given on why Mamata chose Sinha. It was seen as part of her long-term desire to make the Trinamool a party of north and northeastern India, instead of being confined to West Bengal. That is why she gave Rajya Sabha nominations to Congress defectors Sushmita Dev of Assam and Luizinho Faleiro of Goa, thinking they would help in the expansion. Sinha is an orator who had been deployed by the BJP for a quarter century to campaign in the Hindi heartland, and has a rapport with middle-aged and elderly voters. Further, Mamata feels his presence in the front benches of the Lok Sabha will annoy hardcore Modi supporters on the treasury benches.

The actor himself has not set out what his plans will be in the next session, beginning in July. Inside the house, he would be joining other parliamentarians who had glamorous careers like Hema Malini, Smriti Irani and Sunny Deol, all belonging to the BJP.