The Union government is pleased that its Operation Ladakh has received a good response from parliamentarians. In the last three months, around 350 MPs, including Union ministers, have visited the Union territory—to send a message not only to the local people but also to the Chinese troops menacingly sitting at the borders of eastern Ladakh for more than two years. Flights to Leh have been full of MPs travelling with their families, as Rajya Sabha Chairman Venkaiah Naidu and Lok Sabha Speaker Om Birla have given special permission to members of standing committees to take their dear ones to the northernmost point of the country.

The region has been very much in the news since the division of the Jammu and Kashmir state into two Union territories, and later due to the Galwan skirmish and the military confrontation with China. Prime Minister Narendra Modi, too, had asked his ministers—who joined the council of ministers in July—to travel to Ladakh, Jammu and Kashmir as well as northeast states. For many MPs and their families, it was the first experience of the thin air of Ladakh and its stunning landscape. The Ladakhis rolled out the red carpet while doctors posted at civilian and military units attended to the cases of altitude sickness. The Indian Army opened its doors to the MPs to visit frontline stations, even as troops poured in as part of enhanced winter deployment.

Senior Union ministers Rajnath Singh and Nitin Gadkari went to inspect border roads and tunnels. The Border Roads Organisation has built roads even to remote villages in the region. Unlike the earlier strategy of treating Ladakh as closed territory, the new thinking is to attract more domestic tourists. The Ladakh administration has removed the inner line permit restriction for all Indian citizens to visit the notified protected areas of the territory. 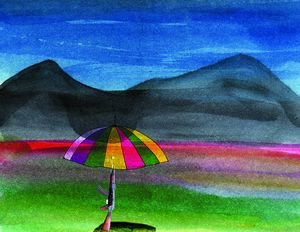 This would help the twin objectives of mainstreaming the Ladakhis and also boosting the local economy. The visit of ministers and MPs has also meant more visits by bureaucrats of various ministries and public sector undertakings before winter closes in.

There are plans to market Ladakh as a destination for trekking, mountain climbing and motoring so that footfalls are there round the year. Ladakh is also becoming a military tourism destination. Defence Minister Rajnath Singh, in 2019, had declared his intentions of opening the Siachen glacier—the world’s highest battlefield—for tourism, which was put on hold due to the pandemic. The new Tourism Minister G. Kishan Reddy, who had handled Ladakh as the minister of state for home affairs, is gung-ho about pushing hard for getting more UNESCO world heritage sites in the region. The information and broadcasting minister, too, is enthusiastic about expanding the radio and television network.

But the government is cautious not to hurt Ladakhi sentiments. It wants to ensure that the tourist drive should not lead to non-Ladakhis coming in large numbers and settling in the cities and valleys of the region, and diluting the unique character of the Buddhist and Muslim populations in Leh and Kargil. Another plan is to upgrade tourist infrastructure to get more foreign tourists in the post-pandemic period. Thus, it would be “Ladakh ho!” for tourists for multiple reasons, in the confidence that the Chinese and Pakistanis are on their best behaviour across the not-fully defined borders.