Sealed envelopes, whether given to the Supreme Court or to the government, often cause much expectation and speculation. The report of a 10-member task force on raising the age of marriage for women submitted to the prime minister’s office, however, seems to point in one direction—a move upwards from the current limit of 18 years. But the committee headed by activist and handicraft curator Jaya Jaitly has been silent about its recommendations, as per the advice of the government.

The committee was tasked to decide whether the age of legal consent for marriage for women should go up to 21, like in the case of men. Prime Minister Narendra Modi, Women and Child Development Minister Smriti Irani and Finance Minister Nirmala Sitharaman had spoken last year on the urgency to revisit the age limit, which was raised in 1978 from 15 to 18 for women and 18 to 21 for men. 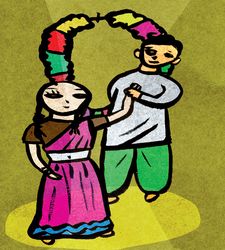 The increasing educational and career opportunities, the need to further reduce maternal mortality rates, improvements in nutritional values for mother and child, and the end of discrimination between genders have been the main reasons mentioned in petitions before courts on the issue. But activists and rights groups worry that raising the age limit could be used as a “coercive” weapon to prevent love marriages.

Status quoists point out that love affairs are more common among teenagers, which culminate in marriage once the boy and girl reach the eligible age. They say the 2006 law against child marriage has largely been used by parents who are opposed to love marriages to file police complaints and court cases, arguing that their ward was underage. The law is also used to annul failed marriages, with ‘family honour’ being saved by a decree of annulment, rather than a divorce. The young women who were brought to police stations and courts suffered more trauma, it was argued.

Some have voiced suspicions that the new proposal is a subtle attempt to control population growth, as women tend to produce less number of children if the first conception does not happen before they turn 20. India has recorded a drop in maternal mortality rates in urban areas, but it is three times higher in rural areas, although teenage pregnancies are more prevalent in urban areas.

Three years ago, the Law Commission of India had noted that gender-based discrepancy in the lower age for marriage was against Articles 14 and 21 of the Constitution, which guaranteed equality and liberty to all. Even now the Indian society—across faiths and regions—expects wives to be younger than husbands. The wife being older than her spouse is still frowned upon, although society accepts elderly men marrying young women. The government feels that women’s right to equality, which is one of the Sustainable Development Goals, can be realised only when there is parity in the age of consent for marriages under personal laws as well as civil laws.

The Jaitly committee report will soon be made available for public feedback, as the government wants to reconcile its proposals with religious, familial and tribal viewpoints, and also with modernistic demands of education and health. When the British colonial government raised the age of marriage in India in the early 20th century from 10 to 12 years, freedom fighter Bal Gangadhar Tilak argued that only Indians could decide on their religious practices. Yet, he added that he would support a far more revolutionary step of raising the age of consent to 16. A century later, the Modi government hopes to create a consensus on the issue, which affects not just women, but families and communities across the country.