The multiple packages of economic stimulus introduced by the Central government and the Reserve Bank of India to battle the twin disasters of Covid-19 and the economic slowdown have shown mixed results.

The monetary side of the rescue plan has shown improvement in the economic figures since September as several indicators have moved up. As the prime minister has told businessmen and industrialists, the huge flow of foreign investment is a sign of robust confidence, though the break-up showed one telecom giant garnering a big chunk of these investments. Though the cash dole outs to farmers and other sections does not match the help given by advanced economies, it increased money circulation. This included targeting government employees with incentives to spend more during the festive season. But small businesses did not get much direct sustenance, though those who depended on banks got some relief.

The non-monetary parts of the stimulus have been more problematic with protests spilling into the streets. The Central and state governments pushed far-reaching changes in agriculture and labour laws, and made drastic openings for private and foreign investors in core resource areas like coal, mining and defence.

The farmer protests have shown that approval by a tame Parliament driven by an inexorably determined executive will not impress the affected sections of the population. Ministers emphasise that Narendra Modi’s credo is consultation before decision, not surrender after a decision is taken. But less determined BJP chief ministers as well as Congress-ruled Rajasthan withdrew the orders increasing working hours in factories. But other labour reforms have been implemented in the name of promoting Atmanirbhar Bharat and this has seen protests spilling into the streets in Karnataka in relation to two foreign investment projects. 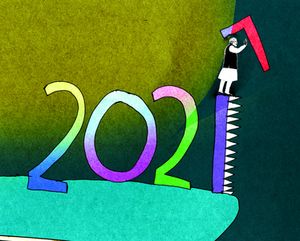 But the thinking in government is that the perception damage is more because of the farmers camping on Delhi borders, though the BJP is confident that the protests would not be pan-India. The central intelligence and investigative agencies are also trying hard to find the soft pressure spots through which the farmers’ leaders can be approached. It is a tussle between a determined group and an aggressive establishment.

The farmers are taking in their stride both the allegations of opposition support and innuendos about anti-national elements and foreign funding. The government treats the street protests more as local law and order incidents to be handled by the police. The government and the party are working hard to fight negative perceptions like the government being against Sikhs or of bulldozing farmers.

There is confidence that these perceptions can be neutralised as in the case of the criticism of the way the government handled the massive migrant crisis during the lockdown. The seventh year of all multi-term prime ministers from Indira Gandhi onwards have been more turbulent, though the pandemic is a new factor compared to what Indira and Manmohan Singh faced during a similar period.

Economics and health experts project a better normal, if not the old normal, in 2021. There is optimism that the severely hobbled sections of the economy like education, exports and travel would revive more vigorously. The multiple vaccines for Covid-19 is expected to galvanise confidence levels. Modi is also looking at the aggressive campaign for snatching the elusive Bengal crown from Mamata Banerjee, while plotting the complete rout of the Congress in five assembly elections. Yet, the deep impact of the events and decisions of 2020 will have to be managed with determination and flexibility in the new year.