In Britain, when prime ministers resign, they also lose the leadership of their parties, and soon leave the House of Commons. They either get elevated to the House of Lords or, like many recent prime ministers, stay out of active politics. The last British leader to make a comeback to prime ministership was Harold Wilson in 1974.

When the 1996 elections produced a hung parliament, Gowda was Karnataka chief minister. The United Front chose Gowda as the leader of its government, which was a surprise. He wanted to join the Lok Sabha, but his colleagues persuaded him to take the easy route of a Rajya Sabha berth.

Gowda led the country for 11 months. Since then he has won the Lok Sabha elections five times and lost twice. Last year, he had hinted at electoral retirement after losing to a BJP stalwart in Karnataka. But now he has heeded to the appeal of Sonia Gandhi and other top leaders to come back to the Rajya Sabha. Gowda is an active participant in parliamentary debates and attends even committee meetings without worrying about protocol.

Indira Gandhi was the first prime minister to return to Parliament after losing power. In 1978, she won a byelection from Karnataka, but her bitter opponents in the Janata Party were determined to keep her out. She was arrested from the Lok Sabha on allegations of misleading Parliament in the Jeep Scandal, and was expelled from its membership. It was another matter that she rode back to power within a year, winning from two Lok Sabha constituencies. Morarji Desai, the first non-Congress prime minister retired from electoral politics after he was toppled in 1979. Rajiv Gandhi had a brief tenure as leader of opposition after being prime minister, but was assassinated during the 1991 election campaign. 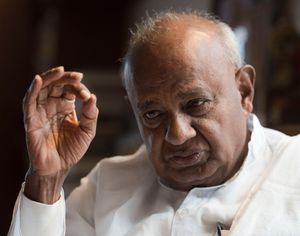 While Charan Singh, who resigned without attending Parliament as prime minister, did not take much interest in proceedings while in opposition, Vajpayee was troubled by ill health after losing the top job, and made rare appearances in the Lok Sabha.

In opposition, Narasimha Rao had the double mortification of facing a party coup and corruption cases. Chandra Shekhar, however, played the role of a senior statesmen during the tenure of five prime ministers. Known as Adhyakshji, he would counsel treasury and opposition benches, as he had friends across the political spectrum. Manmohan Singh has been regularly attending the Rajya Sabha in the last six years; his rare but pointed interventions in debates have made the Narendra Modi government sit and take notice.

Gowda insisted on sitting in the last bench of the Lok Sabha when he lost the first seat of prime minister. He had a tough time with speaker Somnath Chatterjee who would just give a couple of minutes to him—because Gowda was the lone member of his party, and Chatterjee insisted on allotting speaking time based on numerical strength of political parties.

But United Progressive Alliance leaders would persuade Chatterjee to give more time to Gowda, and later he was granted a front row seat—a convention for former prime ministers and deputy prime ministers in Parliament. As he did in the last edition of the Lok Sabha, Gowda has to find ways to make a government with full majority hear his views.