To woo or not to woo

When the AIADMK joined the National Democratic Alliance early last year, the Dravidian party had high hopes of being part of the second Narendra Modi ministry. When the Lok Sabha elections results were announced, the regional party fighting an election for the first time since supremo J. Jayalalithaa’s death, had a rude shock—it had won only one seat in a state that sent 39 members. Yet, the AIADMK pitched hard for a ministerial berth as the government was dependent on the party’s 12 members in the Rajya Sabha, where the NDA did not have a majority. But within three months, the deficit had narrowed as a rampaging Amit Shah made MPs from the Congress and regional parties quit and get re-elected on BJP tickets. There were also splits in regional parties like the Telugu Desam Party, benefitting the saffron party.

Now, the AIADMK has begun to flex its muscles as the Tamil Nadu elections are a year away. The party has realised that the BJP does not bring much to the electoral table, and some district secretaries have argued that it is better not to “waste” assembly seats for the BJP. They also point to the unclear plans of Rajinikanth, who is yet to fully launch his party, but has been fulsomely praising Modi. The worry of some leaders about income tax and enforcement cases against some ministers has not muted the opinion that the party should cut ties with the BJP before it is too late. 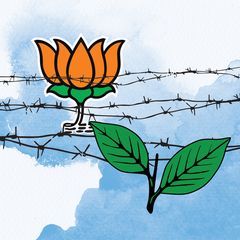 But Chief Minister Edappadi Palaniswamy, who is also party chief, would like to keep all options open until elections are much nearer. He wants the party to take a different line on controversial policies of the Modi government like the National Population Register, but keep the channels open. Thus, the AIADMK, which voted for the Citizenship Amendment Act, now says the concerns of the Muslim community have to be taken into consideration. The state assembly has passed a law which prevents drilling for petroleum in the Cauvery irrigation belt, frustrating the plans of the Union petroleum ministry. But Palaniswamy also wants to get maximum funds from the Centre, critically needed in a pre-election year to complete projects and woo voters who preferred the DMK-led UPA in the Lok Sabha elections.

The AIADMK also has regret that it has not enjoyed Central power on par with its terms in Fort St. George, which houses the seats of executive and legislature in Chennai. An AIADMK minister was there in the short-term government of Charan Singh, and then there were two representatives in Atal Bihari Vajpayee’s 13-month government. On the other hand, the DMK has enjoyed ministerial power in Delhi— for long terms in the cabinets of Manmohan Singh and Vajpayee, as well as smaller spells under V.P. Singh, H.D. Deve Gowda and I.K. Gujral.

Now, Narendra Modi has kept two dozen ministerial positions vacant and electoral allies like the Janata Dal (United) and the AIADMK hope they would get a berth or two. Modi has also kept the post of Lok Sabha deputy speaker vacant, which had been given in his first term to AIADMK’s M. Thambidurai. Interestingly, the deputy chairmanship of the Rajya Sabha will fall vacant soon, as the term of present occupant Harivansh Narayan Singh of JD(U) is coming to an end. But it is to be seen whether a piece of the ministerial pie at the Centre will restore the political bonhomie between the BJP and the AIADMK, or whether the two are likely to go their own way next year at the hustings.