The Uttarakhand wildlife board’s decision to introduce the Asian one-horned rhinoceros into the grasslands of the Jim Corbett National Park has enthused wildlife activists, who were campaigning to bring the gentle giant back to an area named after the great conservationist and hunter of man-eating tigers and leopards. The rhinos had earlier been introduced into the Dudhwa National Park in neighbouring Uttar Pradesh, which has a terrain similar to rhino habitats below the Himalayas in Assam, Bengal, Nepal and Bhutan. The rhinos had, centuries ago, been natural to the area now named after Corbett, but became locally extinct. The decision needs the endorsement of the Central government, which has been encouraging such relocation programmes.

The most successful in recent years has been the reintroduction of tigers into wildlife sanctuaries from which the striped carnivore had disappeared, like Panna in Madhya Pradesh and Sariska in Rajasthan. The reintroduction has been so successful that there are grumblings that Panna is getting overpopulated. While tigers roam in 50 wildlife parks from Kerala to Rajasthan, recent camera trap records show the presence of tigers in the icy Himalayan heights of Arunachal Pradesh. This has excited tiger watchers as the Himalayas are better known as the home of the elusive snow leopards. The country has also successfully relocated other species like the gharial and several deer species. 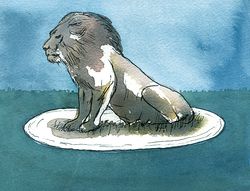 One relocation plan that has failed to materialise is the search for a second home for Asiatic lions, now found only in Gir, Gujarat. There have been pleas that it is dangerous to concentrate the entire population of 600-odd lions in one sanctuary, and to move a small number to a similar habitat in another state. The Madhya Pradesh government identified the Kuno-Palpur sanctuary exclusively for the relocated lions. (Since ancient times, lions have symbolised state power.) But the Gujarat government dug its heels in, refusing to transfer the lions, saying Gir was large enough. When two dozen lions died last year—some victims of the canine distemper virus—the demand was renewed. But Chief Minister Vijay Rupani described the fear of mass extinction of the big cats as exaggerated, and said they were absolutely safe. The Madhya Pradesh government has renewed the proposal, with some of its Congress politicians saying Gujarat is not magnanimous enough to give up the unique identity of being the only home of Asiatic lions. But Gujarat says Kuno-Palpur suffers from handicaps such as low prey base and the presence of tigers. Interestingly, tigers are unknown in Gujarat, though a recent video of a tiger sighting on a state highway created some buzz. Gujarat also says it had relocated some animals to a lion safari in Etawah in Uttar Pradesh, and they had perished.

The issue had gone up to the Supreme Court, which had also ordered the leonine relocation, but there was no follow-up as the BJP ruled both the Centre and Gujarat. Till last year, Madhya Pradesh was also ruled by the BJP, and it was delicate to press Gujarat to part with its pride.

Wildlife activists are sure that one day the relocation will help. Meanwhile, there are campaigns to find new habitats for dozens of wildlife species that are threatened with loss of habitat and other dangers. The sight of rhinos grazing alongside elephants and other herbivores will add to the excitement in Corbett.