Transformational changes in the realm of welfare delivery mechanisms, application of technology in faster project executions, changes in institutional frameworks for enhancing productivity in economic activities and governance, and making India a destination for next-generation technological research and global manufacturing have been the hallmarks of the eight years of the Narendra Modi government.

Here, a key element is the defence sector, which through the Atmanirbhar Bharat initiative of the Modi government, is witnessing, for the first time, a revolutionary involvement of the Indian private sector to cater to the critical requirements of our armed forces.

The recently held Defence Expo 2022, in Gandhinagar, Gujarat, was the exemplification of Modi’s dream of creating an Indian military industrial complex to cater to domestic requirements and to make India a critical hub for global defence manufacturing supply chain. The theme for the 12th edition of this event was —‘Path to Pride’, and why not! 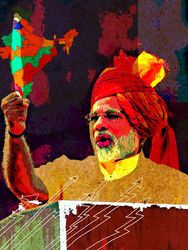 Taking forward Modi’s vision of ‘Make in India, Make for the World’, the defence expo showcased the immense potential of India’s industrial ecosystem and its intrinsic capability to emerge as a globally acclaimed defence manufacturing base, given its history of executing complex industrial scale projects. The heart of every nationalist is filled with pride to witness how, over the last few years, the pavilions are increasingly being filled with innumerable Indian companies—starting from well-known industrial powerhouses to startups—showcasing projects that range from artilleries, missiles, tanks, drones, combat vehicles to a wide variety of Artificial Intelligence-powered products.

Gone are the days when our armed forces had little option but to look forward to foreign vendors to cater to their equipment requirements. Today, for every major foreign vendor in the realm of defence products, there is more than one Indian company willing to offer similar products at a much lower price. This has been made possible as a result of the Modi government’s initiatives to open up greater opportunities for private sector in defence sector, by creating a negative list of items for defence imports, which can now be procured by the armed forces only from Indian industries.

Unfortunately, for decades, India’s private sector was denied its rightful place in defence manufacturing even as lobbies and arms dealers connived with vested interests to restrict India’s defence industrial capability development, so that the country remained dependent on imports.

Modi not only disbanded that culture from the corridors of power but also paved way for Indian companies to unleash their real potential.

Likewise, Modi’s initiatives in making India a hub for research in Artificial Intelligence-powered product development, quantum computing, green hydrogen, 5G, and recognising startups as key players in India’s innovation-led journey towards a $10 trillion economy, are pivotal in making sure that the mistakes of the past, when India could have emerged as a global manufacturing hub, are not repeated.

India’s crossing of the $3.5 trillion GDP milestone, achieving Rs27 lakh crore gross tax collection, hitting $670 billion export target during 2021-22, and its ability to maintain a more than $500 billion forex reserve through these difficult phases that the world economy is facing, are harbingers of the foundation of an Atmanirbhar Bharat that Modi has steadfastly laid for India.