Break the shackles of ignorance; celebrate our proud past: Meenakshi Lekhi

India is a contender for a place on the World Heritage Committee of the United Nations Educational, Scientific and Cultural Organisation (UNESCO) for the period 2021-2025. We have been a part of the World Heritage Committee three times before—1985-1991, 2001-2007 and 2011-2015. Now after the mandatory moratorium of six years, India is contending for its fourth term and this time it is more important than ever. We are celebrating ‘Azadi ka Amrit Mahotsav’ under the guidance of Prime Minister Narendra Modi to cherish the 75 years of Independence and our ancient glory. That glory got drained, and only a few Indians realise how great a debt the world of art owes the Indian civilisation. Be it the art of east Asia or architecture and paintings of the west, all can be traced back to some elements of Indian art and culture.

India is indeed an ancient centre of art, culture, and knowledge. International institutions and the world at large has time and again recognised this fact. But do we as Indians realise the contributions made by our vast civilisation over the years to the world? Today, 40 Indian sites have the UNESCO world heritage tag and various western countries have celebrated October as Hindu heritage month. But why are most of us still ignorant about our land? 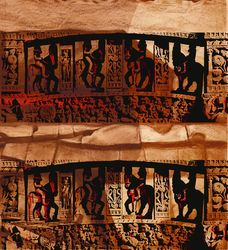 We need to break the shackles of ignorance and reclaim the lost glory of ancient Indian heritage. The Union government has brought a new dawn in this direction. In its unparalleled efforts to promote Indian culture and heritage on the international front, the Union government has also been able to preserve more and more heritage sites and antiquities. Since 2014, 10 new Indian sites have been added to the World Heritage List of UNESCO. As per the records of the Archaeological Survey of India, only 13 antiquities were repatriated to India between 1976 and 2014. On the other hand, since 2014, 42 antiquities from various countries have been repatriated to India. Recently, the Queen of Kashi idol, that was stolen from Varanasi a century ago, was brought back to be reinstalled in its original place.

A special task force, comprising officials of the ministry of external affairs and ministry of culture, has been constituted to expedite the repatriation process of stolen antiquities, which were smuggled out of the country over the decades. Memorandum of understandings with some countries have already been signed, and are being worked out with other countries in this direction. We are positive that by next year 200 idols, paintings and artwork of Indian origin will be repatriated.

Since 2014, six Indian cities were made part of the UNESCO Creative Cities Network—which was launched in 2004, and recognises creativity as a strategic factor in the urban development of cities. These are Varanasi (for music, 2015), Jaipur (for crafts and folk arts, 2015), Chennai (for music, 2017), Mumbai (for film, 2019), and very recently, Srinagar (for crafts and folk arts, 2021). UNESCO requires to be applauded for its efforts in preserving the heritage of India and recognising our due legacy and cultural significance. India and UNESCO are natural partners in advancing the vision of culture as an enabler of sustainable development.

Since time immemorial, India has been a constant source of knowledge and inspiration for various cultures across the world and had directly and indirectly shaped the global village. We are positive that we will be able to seal our place in the 2021-2025 World Heritage Committee and realise what we have envisioned.