The BJP, with 75 seats, has emerged as the single largest party in the District Development Council elections in Jammu and Kashmir. It secured the largest vote share, followed by the National Conference (67), the Peoples Democratic Party (27) and the Congress (26).

The Narendra Modi government’s quick decisions and stern actions have put some order in the perpetually chaotic valley. Winning 72 seats in Jammu and three seats in Kashmir shows that the BJP is on a firm footing. The successful conduct of elections, devoid of violence and lawlessness, is the biggest win after the abrogation of Article 370 of the Constitution.

After threatening to boycott the DDC elections, the regional political parties voted for democratic restoration in the valley so that they could stay relevant.

A measure of the BJP’s strong presence in the Union Territory can be had from the fact that 11 political parties, led by big regional leaders like Omar Abdullah and Mehbooba Mufti, with the backing of the Congress, had to come together to take a stand against the BJP’s agenda of development.

It was for the first time that any election was being held in Jammu and Kashmir after the abrogation of Article 370, and the major takeaway is that people are urging for change in the newly formed Union Territory. People of Jammu supporting the BJP and people of Kashmir supporting independent candidates over the People’s Alliance for Gupkar Declaration is all the evidence we need. 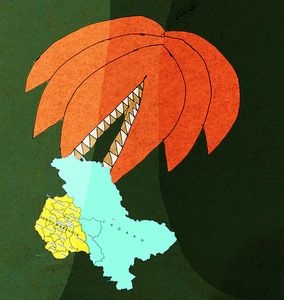 The results have been disheartening for the PDP and the National Conference, which were exploiting the valley for a long time. Maintaining the special status of J&K was nothing but a talisman to keep the Kashmiris in a state of euphoria over being different from the rest of the country. People did not have a choice earlier, and hence had voted for these parties.

Still, DDC elections are very different from assembly polls or Lok Sabha polls, and it was the first election to the council, so no comparisons can be made.

Decades of religious and territorial unrest will take some time to subside, but the start is overwhelming. The trust which the people have put in Prime Minister Modi and the support they have shown to his policies are the reason for a different political arrangement today.

It is too early for the Gupkar Alliance to celebrate as they have designed their own doom. Since development was never on their agenda, Jammu has soundly thrashed them. And their footing in Kashmir is only temporary, given the fact that they won seats on the basis of bringing Article 370 back, which is next to impossible now.

Spring may be a little further away, but Jammu and Kashmir’s frozen politics is thawing with saffron heat.