The Supreme Court has refused the petition seeking a stay on construction of the Central Vista project that aims to revive the Central Secretariat offices and the Parliament. In his refusal of stay, Chief Justice S.A. Bobde clearly mentioned there was no urgency for the project to commence and nobody was going to do anything during the Covid-19 pandemic.

Despite that, there was a strong reaction by the opposition, calling it a Rs20,000-crore project that overlooked the Covid-19 fiscal requirement. The source of this estimate remains unknown. There has been absolute transparency in the process and the official estimate is close to Rs7,600 crore. Considering that the Central government pays Rs1,000 crore annually as rent for its scattered offices, you can assess the project’s efficiency in the long run. Add to it the costs for daily travel allowance, number of vehicles to be bought and maintained, and so on. 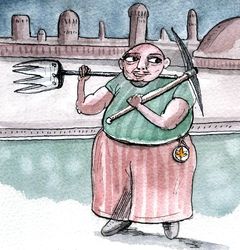 I believe the opposition party is aware that allocation and utilisation of funds takes place in a phased manner. The idea of linking the Central Vista project’s funds and Covid-19 is a propaganda to defame the prime minister and the Central government when the whole world is praising Indian authorities for tackling the pandemic efficiently.

The Central Vista project will prove to be an extension to the identity of the nation. The infrastructure of the Parliament building, North Block and South Block has great history. But the structures are old and do not cater to the needs of the functioning of modern India. They will be turned into a museum for the purpose of sentimental value, but a new structure will facilitate smoother movement of information across ministries. The Central government offices are scattered across 47 buildings in Delhi. For example, the finance ministry is in North Block, but the CBDT and CBIC—two essential tax bodies—have their headquarters around 10km away in South Delhi. Also, the Central civil services rules mention the stipulated carpet area of office space designated to ministers and subsequent officers, which is not being met for most of them. The Secretariat has grown considerably over the years and temporary setups have been installed to accommodate staff within the corridors. There are not even enough rooms to accommodate all the members of Parliament. The number of Lok Sabha constituencies is also expected to increase due to reorganisation, and their staff deserve at least an office within the Parliament. The century-old structure poses a safety and security concern for all Central government employees and the data that is stored within.

The setting that we work in is more than just buildings. They are symbols of the autocratic rule by the tyrannical British government. The layout is the exact opposite of what a central law-making body of a democracy should look like. There are large rooms for senior officials, positions held by the British at the time, and barely any space for the subordinate staff that was mostly Indian. The whole system reeks of the Indian ‘chalta hai’ attitude, which Prime Minister Narendra Modi is strictly against.

Independent India could not afford to rebuild such powerful structures during its initial years. However, this was long due. After close to 75 years of independence, and with the withering of the colonial hangover, the project has more than just physical benefits. It will give a sense of Indian-ness to its citizens, who will be well represented by a structure that we can proudly call our own.