It is no longer a Trump card

What is Trump without his megaphone?

Heads I win, tails you lose. Donald Trump’s version is—“if Republicans win, I should get all the credit, if they lose, I should not be blamed at all.” But pundits and partymen blame him for the Republicans losing an expected victory because his candidates—mostly low-quality, election-deniers—lost in the mid-term elections. The boastful “kingmaker” reduced the anticipated Republican red wave into a ripple. Serving presidents are sitting ducks for voter backlash in midterm elections. Joe Biden was the ugliest duck of them all because he had historically low ratings of 40 per cent going into these elections. Yet, Democrats fared well.

Youth and women are offended by Trump and his handpicked anti-abortion judges. Democracy matters. Inflation, economy, immigration and crime should have worked against the incumbent Democrats. Suburban dwellers had turned against Biden. But, then, Trump came along and played cute, saying he may contest 2024 presidential elections “very, very, very, probably”. It reminded the suburbans why they voted against him in 2020. They did it again.

Analysts wonder how this midterm result will impact Trump’s ambition to run in 2024. Rupert Murdoch’s empire, especially Fox News, is a lodestar. It was pivotal in Trump’s rise and rule. A wily old fox, Murdoch senses shifting political winds. He now calls Trump a “loser”. His New York Post front-paged an oversized picture of “Trumpty Dumpty” with the caption, “Don (who couldn’t build a great wall) had a great fall.” Murdoch never liked Trump, calling him a “f…idiot” according to author Michael Wolfe. But, supporting Trump made Fox News into the most-watched news channel in the US. 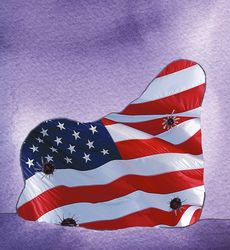 Murdoch has chosen a winner, anointing Florida’s governor Ron DeSantis, 44, as “the new leader of the Republican party”. The star of the midterms is undoubtedly DeSantis. Even though Florida is polarised with wafer-thin election margins, DeSantis won decisively with a 20 per cent lead. He is combative, popular and as rightwing as Trump—who had endorsed him in 2018. Doug Heye, a Republican strategist says, “We have seen moments like this before, where we thought the party was going to turn against Trump. But now for the first time with DeSantis we have another option.”

American media has already started the “Ron vs Don” war. DeSantis has not announced his presidential intentions and it is unclear whether his popularity extends beyond Florida’s borders. But many Republicans are abandoning the past with the old man and his baggage to rally behind “DeFuture” with its young, rising, vote-getter. A furious Trump resorted to blackmail. If the “Disloyal de-sanctimonious” challenged him for the 2024 Republican presidential nomination, he would reveal “unflattering” information, adding, “I know more about him than anybody other than perhaps his wife.” DeSantis’s wife, Casey, is drop-dead gorgeous, outshining Melania. Trump slandered both DeSantis and Murdoch.

Trump’s feistiness fails to hide the serious controversies he is embroiled in—his role in instigating the January 6 Capitol attack, criminal investigations into his handling of classified documents, and tax evasion. Will he win in 2024? Very, very, very probably not. But Teflon Trump has had the devil’s luck all his life. His base is intact and his election piggy bank is swelling.

But so is criticism. Mike Pompeo, Trump’s former secretary of state, tweeted “Conservatives are elected when we deliver. Not when we just rail on social media.” Karl Rowe, George Bush’s adviser, urged Republicans to “reject nuts”. Moderate Republicans counselled Trump to “move on”. But can he? What is Trump without his megaphone? Not just Trumpty Dumpty, but an emperor without clothes.