Bezos’s behemoth boat and a bridge that didn’t budge

The Red Sea parted for Moses. So, the world’s second richest man expected a monumental, century-old bridge to part for his superyacht. Amazon founder Jeff Bezos owns the world’s newest, biggest yacht, built at Rotterdam’s shipyard. The $500 million, 417ft long yacht is getting ready for its maiden voyage. But Rotterdam’s heritage Koningshaven bridge, an iconic symbol of the Netherlands’s industrial past, stood in its way. The sailing yacht’s three 229ft tall masts would crash against the bridge. Bezos’s solution: dismantle the bridge’s mid-section, let his super schooner sail through and then reassemble the bridge. Simple.

And that’s when the fight started.

Rotterdam citizens were outraged. The gall of the man! Riding roughshod over their sentiments, humbling a national treasure just so his expensive toy can pass? Rotterdam is a working-class city. Issues like global inequality and the power of tech billionaires are topics of impassioned public debate. Asked Dutch historian Paul van de Laar, “Has this city become a playground of the billionaires? Are we to bow our heads to Jeff Bezos as he sails past in his pleasure boat?” 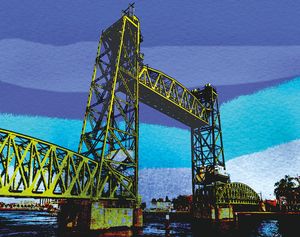 Bezos is a divisive figure. To some, he is a symbol of rapacious capitalism who became super-rich by squeezing his workers. Others praise him for being a visionary, a successful job and wealth creator. Many Dutch take pride that Bezos’s superyacht is built in the Netherlands, a tribute to centuries-old Dutch seafaring genius. City counsellor Ellen Verkoelen argued that the yacht should be allowed to sail through. “Some people are jealous of the rich who have money to spend as they please,” she said. “If they are spending, isn’t it good they spend it here?”

Yacht-building creates jobs, but it also creates environmental disturbance. Some argued the yacht is a one-off contract and jobs will disappear once it sails away. Others say copycat billionaires will head to Rotterdam to build their fantasy yachts, ensuring the rejuvenation of this industry.

Officials said the mid-portion of the historic bridge is sometimes temporarily dismantled for a €100,000 fee to allow big vessels to pass through. Entrepreneur Dianthus Panacho said the rule should be: bigger the vessel, bigger the fee. “It’s all about ego and arrogance,” he said. “Bezos should pay double the fee to help impoverished families living near the bridge.”Not that Bezos would fret over the fee. Citizens suspect Oceanco, the company building the yacht, would not have embarked on this contract without prior approval from the authorities. Said Laar, “The rich always find ways to override popular opinion.”

The details of Bezos’s uber luxurious yacht are kept secret, but it has a black hull with a white superstructure and a long, sleek bowsprit, extending from the vessel’s prow like a missile frozen in flight. It has all the extravaganzas of a floating pleasure palace with royal suites, gourmet restaurants, gym, theatre, pool and helipad. The world’s most ecological yacht can reportedly sail across the Atlantic without burning fossil fuel, reaching a high speed of 30 knots.

The Bezos boat is codenamed Y721. Yes, why? Instead of dismantling the bridge, it may have been simpler to dismantle and pack the three masts and get Amazon to deliver to its founder. Rotterdam’s rage rose. Citizens swore to humble the Bezos’ behemoth with their missiles—rotten eggs. In the end, the superyacht sneaked out to another shipyard for its finishing touches, fleeing full speed through an alternate canal route in the cover of darkness—the perennial, preferred escape route of the rich and the famous.