A popular refrain in London these days is “the wheels of Boris Johnson’s government are falling off”. Johnson’s closest aides are spinning away and out from the prime minister’s office for reasons ranging from his or their misbehaviour. The resignations have come in the wake of Partygate—the scandalous series of chummy, boozy parties held in 10 Downing Street when the rest of the country was isolated under strict lockdowns. Tabloids described it as Johnson’s “Week from Hell”.

For the first time, a section of his own Conservative partymen revolted, joining ranks with the opposition to demand that he go. But unless 54 Tory MPs sign up for his ouster, Johnson’s jalopy careens on, with or without wheels. British politics commentator Prof. Erik Mustad said, “Johnson will cling to power until it is completely impossible to remain as prime minister.” 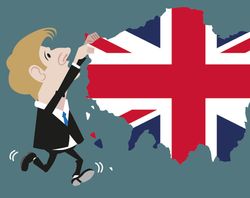 Johnson’s past suggests he will keep running, ducking and punching until he has no place to hide. Partygate reinforced the image of the PM and his aides as a bunch of rambunctious dorm buddies unfit for high office—cavalier, irresponsible and insensitive to national suffering. They celebrated in Downing Street with garden parties, “Wine Time Fridays”, quiz and fizz festivities, secret Santa soirees and,” bring your own booze” (byob) party. Outside, 500 people were dying of Covid every day, ordinary people arrested and fined for “unlawful” get-togethers. The acronym ‘byob’ went viral, while banners sprouted like poisonous mushrooms: “He partied, while people died”.

The biggest of the wheels to come off was Munira Mirza, Johnson’s policy chief, a loyal aide of 14 years, since he was London mayor. She left because she could not stomach his scurrilous lies against opposition leader Keir Starmer that he failed to prosecute a celebrity paedophile. Johnson’s reflex reaction was to quickly put stepneys in place, hoping his promises to induct new staff, refresh his cabinet and reboot his relationship with the party, would defuse party rebellion.

The superseding of the critical Sue Gray report that investigated Partygate with a new police inquiry has bought Johnson time. The embattled PM, who swings from crises to crises, calculates a new crisis will eclipse Partygate and the calls for his resignation will lose steam.

But the British public are tired of crises and his poll ratings are sinking. His handling of Covid was a policy of errors, rife with contradictions, violations and decisions that doubled the death toll, scientists said. Covid shaved off a jaw-dropping 20 per cent from the GDP. When the job subsidy that supports 8.9 million workers ends in June, experts predict a 10 per cent unemployment rate—the worst in Britain since the Depression. Inflation, supply shortages and high energy prices have been brutal. A YouGov poll found that 72 per cent of Britons disapprove of Johnson—a big shift from his 2019 landslide election victory when he landed the Conservative Party 359 MPs.

With Brexit, Johnson divided Britain. Now, he divides Conservative Party. With varying intensities of internal opposition, it is difficult for him to rule with authority. The battle has shifted outside, between his loyalists and would-be assassins. More exposes or election losses can be fatal. In December, the Tories lost the North Shropshire seat that they had held for a century. Said Mustad, “Johnson has dug his grave deeper and deeper. But for now, he is still sitting there.” Everybody agrees Johnson cannot survive another “Week from Hell”. Then again, he has the devil’s luck. Then again, luck is fickle.