A bird was my best teacher this year. A sweeping section of the fjord outside my window had frozen overnight, a spectacular phenomenon. Nature’s majesty was on full display as ice sparkled, snow glistened, dreamy mists swirled and wisps of steam curled up. The ice on the fjord crackled and broke apart in the winter sun, becoming a metaphor for the fragility of life during the pandemic. A flock of seagulls huddled on a floating breakaway block of ice, the size of a car. As the wind surged, this sheet of ice began disintegrating into the foam-flecked waves. The gulls squawked and flew away.

She stood her ground on the thin slice of shrinking ice and began grooming herself. Unperturbed and undistracted by the choppy waves, she focused on nuzzling her right wing, then left, then her chest. And on and on she repeated her ritual, even as her ice patch became smaller and smaller, bobbing perilously into the far beyond. I decided the gull was female and named her Wavelle. She did not give up, she did not look up, she did not fly away like the others. She just concentrated on her routine, fearlessly, patiently, diligently. 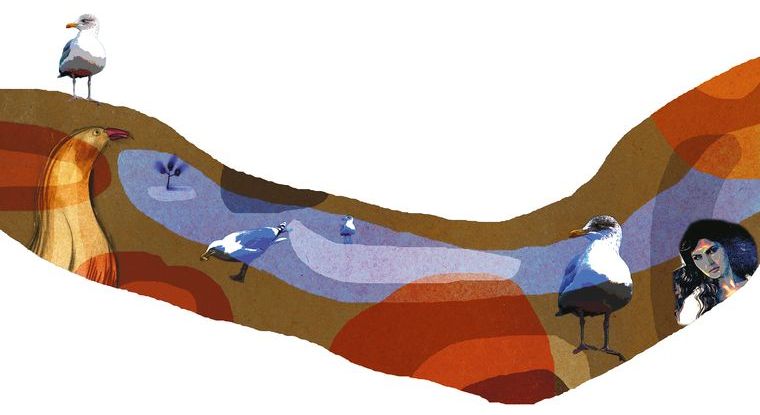 It was a good lesson on how best to endure and survive the pandemic—or any calamity for that matter. Concentrate on the routine. Religious leaders advise it is wise to submit to higher forces when they are beyond your control. But never surrender will. That is within one’s control and one can choose how to respond. When misfortune befalls, the common reaction is anger or self-pity, fear or loathing. People complain or create mischief. But all this is pointless, self-defeating behaviour.

Instead, times of adversity can be used to study, learn, teach, write, paint, and help others. Do your duty, reward is not your concern, the Gita teaches. Instead of getting sucked into the vortex of the never-ending cycle of alarming news or conspiracy theories, it is better to focus on one’s daily routine, writing, singing, home-schooling children, cooking, administering, dancing, coding, crunching numbers, whatever. Concentrating on activity is also meditation.

New-age gurus advise “Do what you love”. Much of the time, we may not love what we are doing. But keeping at it helps. The discipline of daily practice is as important as the outcome. As time goes by, discipline becomes the outcome. Without realising, we have improved, one day at a time, one word, one brushstroke, one note, one digit, one ingredient, one peck at a time. The inner spark of creativity is lit, it grows and glows, despite the surrounding pain, chaos and meaninglessness.

The journey of this inner spark is told beautifully in Richard Bach’s Jonathan Livingston Seagull, a cult book from the 1970s. Little Jonathan, the seagull, knew there was more to life than the ceaseless squabbling for food. He finds his joy, his meaning in flying. His flock ostracises him for not conforming, but he finds enlightened teachers who impart an age-old wisdom: practice makes perfect.

That was a lesson taught by my own seagull. While Jonathan taught the magic of flying high, Wavelle’s lesson was about staying grounded, persisting with her routine even as the ice beneath her webbed feet shrank. Her space, her world closed in, as the lockdowns did on us. Flying Jonathan and steady Wavelle represent the equilibrium of opposing male-female forces. Soaring or still, imagination unlocks the magic world of possibilities. Filmmaker Satyajit Ray once said: “To some, it is only a droplet, but I see the whole world in
a dewdrop”.

Bach based his book on American aviator John Livingstone, who died in 1974 at age 77 shortly after test flying an aerobatic aircraft. Livingstone’s wife’s name was Wavelle. Of course, even if others had seen my Wavelle’s voyage on windy waves, they would not have given her a second glance, let alone thought. Like beauty, interpretation lies in the eye of the beholder. To some, a daft bird. To me, a nonconformist gull that demonstrated 2021’s best life lesson.