Football star Cristiano Ronaldo is a poster child for anti-abortion campaigners. His impoverished mother, Maria, wanted to abort him because life was desperate with three children and an alcoholic husband. But, in 1984, abortion was forbidden in catholic Portugal. So Maria gave birth and an unwanted star was born.

Fast forward to the present. Ronaldo attained superstardom in the ongoing European football championship when he scored his 109th goal in international matches. Covid gave way to football fever as Ronaldo tied with Iran’s Ali Daei to become the world’s champion scorer.

But Ronaldo did not start life as a champion. His father was a gardener and his mother a cook. They lived in a one-room tenement without electricity, where sunlight squeezed through the cracks. Bullied in school for his dialect and his poverty, Ronaldo acquired a defiant, smouldering, sullen look that seemed a shield of defence and was destined to break hearts later on.

His father named him after Ronald Reagan. That seemed a cruel joke as Ronaldo’s childhood was more about scars than stars. Legend has it that he was expelled at 14 for throwing a chair at a mocking teacher. He hated school and loved football, so became free to focus on the game. The rest is history. “Dreams are not what you see in your sleep, dreams are things which do not let you sleep,” he famously said. 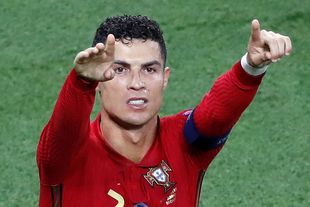 One well-meaning teacher warned him that football would not put food on the table. In 2020, Forbes reported that Ronaldo’s net worth had crossed $1 billion. He champions many just causes. His kicks make millions. His flicks erase millions. At a recent press conference, he pushed aside the Coca-Cola bottles placed in front of him, a gesture that wiped out millions in Coke’s share value. His message: “Drink water!”

Ronaldo’s mesmerising dribbles, long-range goals and animal spirits make him a superstar. He runs like a cheetah, kicks like a kangaroo, jumps like an impala and has the stamina of a horse. Sports commentator Carl-Erik Torp said, “Portugal team is not that good, but Ronaldo is always dangerous.” Ronaldo is hyper-competitive and cocky, but has talent and humour to back his swagger. He said of himself: “He’s six foot two, brave as a lion, strong as an ox and quick as lightning. If he was good looking, you’d say he has everything.” He sure has, including 500 million followers on social media.

Ronaldo is poised to become the greatest footballer of all time. His main rival is Argentina’s Lionel Messi. There are strong similarities—both come from poor families, both overcame childhood medical conditions, both dribble like magic. There the similarities end. Messi believes God made him. Ronaldo takes pride that he made himself, overcoming endless obstacles through sheer grit and sacrifice.

Both are in their mid-30s and are performing well, an unusual phenomenon among sportsmen. Gone are the days when injuries aborted the careers of 25-year-old athletes, forcing them into retirement. Now they gain an extra decade of playing not because of God or self, but science. While their genius has brought them thus far, what takes them further are medical interventions. Some athletes have had more than 30 surgeries, fusing and fixing assorted bone, muscle and tissue. Said Ronaldo, “Many people helped me along the way. Above all, though, I want to mention the help of my medical team that has been working alongside me.” He sees them as his guardian angels.