It was not meant to be this way. But then, such are the ironies of fate, its twists and turns that mock. On New Year’s Day, the United Kingdom embarked on a historic journey as an “independent” nation, breaking free from the European Union. It was “Onward Ho”, travelling far and wide, under a brand-new identity—“Global Britain”—restoring imperial grandeur, spreading opportunities, championing international causes, cutting lucrative trade deals with nations near and distant.

But on the eve of this new journey, Britain was isolated as never before. Following the detection of the “English virus”, an extremely contagious variant of the novel coronavirus, nearly 50 countries pulled up their drawbridges to deny entry to British citizens, goods and flights. Perversely, it was as if the UK leaves the EU, but the world leaves Britain.

Even the nations within the kingdom—Scotland, Wales and Northern Ireland—shunned the English. The irony was biting—the mutant virus was discovered in England, the “imperial-nostalgic” birthplace of Brexit. And Britons were banned just when they were readying to go forth into the world. Throughout 2020, Brexit and Covid-19 unfolded as parallel stories in Britain, neither impacting the other.

David Gauke, a former Tory lord chancellor, observed, “as in a TV series finale, the two plots are finally brought together.” 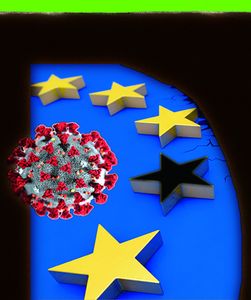 In England, Brexit-induced bottlenecks were expected at the borders, especially in the English port of Dover, the main hub for trade with the EU, through France’s Calais port. But a few days before Brexit, the variant virus created havoc in Dover. As France blockaded Britain, some 10,000 trucks, laden with vegetables and fish, were stranded for days. With no money, food, water and toilet facilities, angry drivers scuffled with police. Some 8,000 military personnel were brought in.

Supermarket shelves emptied and tempers frayed. Lufthansa sent planeloads of fresh food to Britain—humanitarian gestures that contradicted the Brexiteer demonisation of the EU. The English love to blame the French for their misfortunes. But PM Boris Johnson had to plead with French President Emmanuel Macron to allow the flow of goods. Macron did, and his decision demonstrated how interconnected, mutually dependent and globalised the world is. Macron was appeasing his French supermarket owners and connoisseurs. Lockdown or no lockdown, langoustines—those delicious lobsters fresh from Britain—are to be savoured, not sacrificed at border crossings.

Every crisis has silver linings. The Dover disruption, a preview of the catastrophic consequences of a no-deal Brexit, finally nudged the UK and EU to sign a trade deal. Global Britain’s first export seemed to be this mutant virus, which sneaked into Europe, Canada, Japan and even Australia.

The virus variant probably exists elsewhere, but it was detected first in England because British scientists have excelled in sequencing the coronavirus genome. Regular Covid-19 tests cannot detect viral mutations. They can only be identified by analysing the vast genetic data in each sample, using specialised machines.

The silver lining for Britain is that these discoveries form the launchpad for a profitable new life sciences industry. The UK’s regulatory system is now independent of the EU, so the government plans to offer fast-tracked approvals to drug manufacturers for innovative medicine. The game plan is for the UK to emerge as a post-Brexit creativity hub. Johnson’s clarion call: “unleash the animal spirits”.

Rousing rhetoric hides not Global Britain’s shaky start. But that’s no reason to believe it cannot steady its course. Fate is fickle; it tricks and tempts. But the Brits, they are tenacious and tough.