Dark-suited and silent, he is the typical, faceless bureaucrat. Now he is the face of Japan. Prime Minister Yoshihide Suga appears to fit Winston Churchill’s description of his political opponent Clement Attlee—a modest man with much to be modest about.

Suga is modest because his origins are modest. Son of a strawberry farmer from northern Japan, Suga fled his village at 18 and laboured in a cardboard factory to pay his Tokyo college fees. In the parallel universe of Japan’s elitist dynastic political families, whose scions become PMs, humble origins are insurmountable barriers to political crowning. 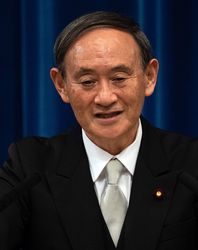 But destiny favoured Suga. Greatness was thrust upon him by former PM Shinzo Abe, who resigned suddenly citing ill health. Abe knew his devoted lieutenant Suga would safeguard his legacy and complete his unfinished reforms. They had been a good team—Abe grandstanding in the limelight, Suga toiling in the shadows.

With almost eight years at the helm, Abe is Japan’s longest-serving PM, and his appointee—the unsmiling, weary-eyed Suga—the nation’s longest-serving chief cabinet secretary. Self-effacing Suga secured that top job through loyalty and merit. But he also had an underrated asset and strategy—a drab personality that helped him fly under the radar. “The nail that stands out gets hammered,” is a popular saying in Japan, where society swiftly squashes any deviation from conformity, modesty and humility. Abe and Taro Kano, another blue-blooded minister who could eventually become PM, are mavericks. But Japanese carpentry rules do not apply to princelings.

For now, the princelings who head the fratricidal factions in Japan’s ruling LDP party support Suga’s elevation because he is uncontroversial and a political lightweight. Anyway, this is a stop-gap arrangement until the September 2021 elections. For similar reasons, Congress factions had agreed upon the mild-mannered, scholarly P.V. Narasimha Rao becoming prime minister after Rajiv Gandhi’s assassination three decades ago. Rao went on to serve a full term.

Like Rao, Suga, 71, is not a vote-getter. He is disciplined and hard-working, but lacks people skills, charisma and eloquence. In his victory speech, he prioritised tackling Covid-19 and then droned: “I want to break down bureaucratic sectionalism, vested interests and the blind adherence to precedent.” Not exactly crackling words that inspire voters to spark revolutions.

But like Rao, Suga has a trump card, acquired through a long innings in politics. He is a skilful, behind-the-curtain operator who can manoeuvre Japan’s opaque bureaucracy. It is tempting to describe Suga as a humourless Sir Humphrey, the crafty bureaucrat in the BBC sitcom Yes Minister.

Some experts predict that Suga is doomed to be merely a stand-in PM because the sectarian samurais will swoop in for the kill before next year’s elections. Internecine warfare could propel Japan back to the “revolving door” era—short-term PMs packed off prematurely by rivals. Since World War II, Japan has had 63 PMs. But others say Suga’s factional neutrality may help him become the least troublesome choice that all can agree upon... again.

Much depends on how Suga tackles his basket of inherited problems—the pandemic, a shrinking population, an ageing society, the slumping economy, the massive public debt and a rising China. His past suggests he is reform-minded. He counts the privatisation of Japan railways as one of his triumphs. He may even call snap elections to secure himself. Suga has already travelled far from his humble origins. If he plods on as a boring bureaucrat who delivers results, he may yet pioneer a ‘velvet revolution’ in Japanese politics.