During the pandemic, the rich got richer. Not only billionaires like Amazon’s Jeff Bezos or Microsoft’s Bill Gates, whose goods and services enjoyed unprecedented demand. The rich got richer because they could not spend. New research shows that spending by the top 25 per cent of American earners’ dropped by 17 per cent; in low income groups it fell only by 4 per cent.

The rich saved money as they worked and played at home. But the livelihood of many low-wage workers depends on the lifestyle and whims of the rich. While landscaping and swimming pool services thrived, small businesses in the posh neighbourhoods—wine bars, sushi restaurants, Pilates studios, and gourmet boutiques—suffered a 70 per cent revenue drop and a 65 per cent job loss.

Studying consumption patterns is kosher—it is economics, capitalism and utterly American. Two-thirds of the United States economy is fuelled by consumption. But Chetty establishes the moral significance of Big Data, using it to expose the underbelly of injustice, inequality and income-segregation. His “Opportunity Atlas” map colour-codes rich and poor neighbourhoods across the US, revealing that poverty is concentrated in the former slave-owning regions. There is an oasis of white affluence in towns like Charlotte, fringed by ghettos of black misery. His research proves that moving children to better neighbourhoods improves their future income. The younger the child, the greater the benefit. The children of one per-centers are 10 times more likely to become inventors even when their childhood math scores were the same as the poor children’s. Chetty calls these underprivileged children “Lost Einsteins”, cursed by their poor neighbourhoods. Today’s street protests underline Leonardo da Vinci’s 500-year old observation: “Inequality is the cause of all local movements.” 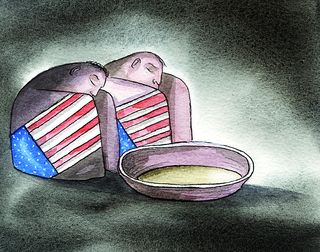 Chetty’s data show that the government response to Covid-19 was largely ineffective. The $500 billion support to big companies did not save jobs. It should have been given to small businesses. The $1,200 stimulus cheques bearing Donald Trump’s name went to millions of affluent housewives, expatriates and even dead Americans. Chetty warns against forcibly restarting the economy. As long as the rich are afraid of the virus, they will not go out and spend money. So the government must bring the virus under control.

The economy will eventually return, but millions of low-paid American jobs may not. Previous shocks—globalisation, offshoring, deindustrialisation—reveal that workers find relocation and retraining difficult. In the 2000s, a million manufacturing jobs were lost in the American Rust Belt to cheap Chinese imports. Unable to find new jobs, non-college-educated, middle-aged white men became addicted to alcohol and opioids, resulting in “Deaths of Despair”.

Researchers despair over the ruins of the American Dream. The dream extols the ideal that regardless of where they are born, capable children can succeed and earn more than their parents. Chetty busts this myth. He has shown that children born in 1940 had a 90 per cent chance of earning more than their parents. In 1990, only 50 per cent stood that chance. How then does one achieve the American Dream? Chetty says: Move to Canada.