Tall and handsome in a craggy sort of way, Dr Anders Tegnell commands the highest popularity ratings in Sweden. Youngsters tattoo his face on their bodies. But he is no rock star. He is a bespectacled, boring bureaucrat. Tegnell, 64, is Sweden’s chief epidemiologist—the architect of Covid-19 ‘Lockdown Lite’, which made his nation the world’s most fascinating outlier. Says prominent scientist Johan Giesecke: “Sweden is doing it right. Everyone else is wrong.”

While most countries imprisoned citizens in their homes for two months, Sweden targeted shutting down only places acutely vulnerable to Covid-19. Care homes and universities were closed, but schools, offices, factories, shops and cafes remained open throughout. People were instructed to work from home if possible, restrict travel and maintain two-metre distance in all public places, including restaurants. Sweden’s economy never froze. 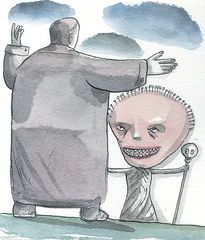 Tegnell’s strategy counted firstly on Swedish citizens’ fabled sense of duty and compliance. It also helps that the Swedes are not touchy-feely, hugging and kissing, like the Italians and the Spaniards. Secondly, the authorities aimed to protect the public health system from becoming overburdened.

Tegnell, whose 30-year career in public health includes field experience from the 1995 Ebola epidemic, says health policies should be “sustainable and holistic”. “Confining schoolchildren for weeks harms them mentally and psychologically”. Likewise, shutting the economy “is a terrible option because losing jobs is extremely dangerous to health,” he says.

It is too early to determine if Tegnell’s way is the better global role model. Sweden’s Covid-19 death rate is way above Norway’s and Denmark’s, but far below that of other European countries like Britain, France, Spain, Italy or Belgium. The elderly account for 50 per cent of the death toll. Still, the public health system was not overwhelmed, having 20 per cent spare capacity in ICU beds even at the pandemic’s peak. Sweden’s economy did not suffer a cardiac arrest, but shrank six per cent mainly due to supply disruptions as other countries imposed severe lockdowns.

President Donald Trump would happily import Tegnell and his ‘Lockdown Lite’ strategy to replace his own expert, Anthony Fauci, who advocates total shutdowns. But Tegnell’s model cannot be replicated in the United States. Science-trusting, law-abiding Swedes respect authority, unlike the gun-slinging American protesters. The pandemic also exposes how inadequate the American public health system is.

Experts will surely examine if the world did the right thing in imitating China’s sledgehammer lockdown. Scientists say we must learn to live with this virus. Having achieved a higher immunity rate, Sweden can probably cope better with future Covid-19 outbreaks.

But Tegnell has strong critics. Accusing him of “gambling”, Dr Stefan Hanson, a Swedish infectious disease expert, said: “You cannot take risks with people’s lives if you do not know what risks you are taking.” Tegnell’s strategy was attacked by 2,000 Swedish scientists, but over one lakh Swedes joined Anders Tegnell fan clubs, which are sprouting like dandelions in spring. Fans see him as a hero who had the courage to be the lone voice, steadfastly safeguarding health and economy. Praised WHO’s Michael Ryan: “I think there may be lessons to be learned from our colleagues in Sweden.”

Tegnell finds his cult status “absurd”. His three daughters think the media hoopla is hilarious, especially a fashion magazine’s analysis of his dress sense—or lack thereof. With his maroon pullovers and brown jackets, his matter-of-fact comments and contrarian views, his fan clubs and daring strategy, Anders Tegnell is no boring bureaucrat after all.