Who would buy an expensive bottle of “vampire repellant spray”? If you believe in vampires, cheap garlic should do the trick. Oscar-winning actor Gwyneth Paltrow’s luxury lifestyle company Goop peddles a vampire “psychic mist” that uses “gem healing and aromatic therapeutic oils” to banish evil spirits, expel negative energy and shield buyers from the bad vibes of people near them. If the boss is the vampire, they do not need the spray now, when working from home. If it is their husband, then no repellant can help when they are quarantined together.

Goop’s other outlandish offerings include coffee enemas (presumably to awaken the inner you), chill child (to mollify your frisky kid into a furry lamb), a hyped “90-second breath-workout” that takes six minutes, $1,20,000 (Rs91 lakh) gold dumbbells (guaranteed to reduce your bank balance if not your weight), $2,300 (Rs1.75 lakh) gilded playing cards (to kill time when you have arrived but are going nowhere), $43,200 (Rs32.86 lakh) chandelier earrings (to show you have pierced glass ceilings), Devi steamer seat (to send vapours to body parts that have never seen sunshine) and more. Several other products cannot be mentioned in a family magazine.

Like its silly sprays, exotic elixirs, pampering potions and gobsmacking gizmos, the company’s very name is idiotic. Goop. It means nothing, it stands for nothing. Paltrow claims someone told her that successful internet companies have two ‘O’s in their names. Like, Facebook and Google. Never mind Netflix, Amazon, Uber—that is an irrelevant detail in her saga. For customers yearning for the elusive, the unknown, the instant fix, the manic mantra, the luxury purr, the magic cure, Goop it is. This is the La La Land of the loopy one percenters. Escape in a bottle. Dreams in a jar. Hope in a tube. The sorcery ends with the last squeeze. Some customers go away, others come back for more. 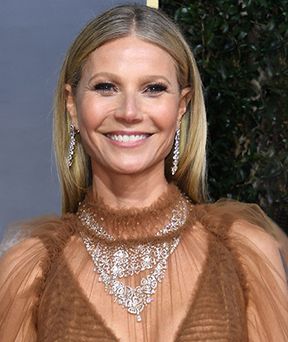 Paltrow launched Goop from her kitchen. Scientists wish it had stayed there. She began with a “homespun” newsletter that swelled into a major enterprise, hawking health, beauty, fashion, accessories, décor, gadgets, books, alternative therapies and celebrity cruises. At Goop’s “health summits”, patients give testimonies about how love in the brain brought back dead people or positive emotions cured cancer (neglecting to mention their chemotherapy).

Goop is the scientific community’s four-letter word. Experts groaned when Netflix recently launched a docuseries on Goop’s psychedelic and energy exorcism cures for physical and mental illnesses. An aghast Simon Stevens, head of Britain’s National Health Service, said Goop’s “dubious wellness products and dodgy procedures” posed “considerable health risk”to the public, adding “people’s natural concern for their health, and particularly about that of their loved ones, makes this particularly fertile ground for quacks, charlatans and cranks”.

Susceptibility of the gullible is Paltrow’s currency, controversy her best salesman. “I get more eyeballs,” she says. More eyeballs, more sales. Experts attack her goofy, loony products. But items like vampire mist have helped Goop become a $250 million (Rs1,900 crore) wellness empire, proof that the double ‘O’ voodoo works for her.