In his essay Politics and the English Language, author George Orwell wrote: “Politics itself is a mass of lies, evasions, folly, hatred and schizophrenia. When the general atmosphere is bad, language must suffer.”

Political discourse has coarsened since the twin shocks of 2016—the Brexit referendum and the election of Donald Trump. Language reflects this. It is not just rebels and terrorists, but even mainstream politicians and institutional leaders curse, insult, damn and doom their opponents. European Council president Donald Tusk tweeted: “I have been wondering what that special place in hell looks like, for those who promoted Brexit, without even a sketch of a plan how to carry it out safely.” Retaliation was swift. Northern Ireland’s DUP party that props up British Prime Minister Theresa May’s government, called Tusk “a devilish, trident-wielding Euro-maniac”. 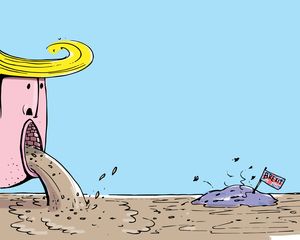 Insults have been hurled through history, but the best ones are those that fly on the wings of wit and sarcasm. Winston Churchill was in a league of his own. About his rival and former British prime minister Clement Attlee, he said: “An empty cab pulled up to Downing Street, and Clement Attlee got out.” Churchill was equally devastating about foreigners. He said of French president Charles de Gaulle: “What can you do with a man who looks like a female llama surprised when bathing?” Churchill was funny, profound, stinging and clever with words, evoking powerful imagery to immortalise his barbs.

Across the Atlantic, a favourite butt of barbs is former US president George W. Bush—mainly because of his corny declarations. “The vast majority of our imports come from outside the country,” he announced. “Our enemies are innovative and resourceful, and so are we. They never stop thinking about new ways to harm our country and our people, and neither do we.” Bush had both wealth and an excellent education. But, Barney Frank, former United States senator, observed, ”People might cite George Bush as proof that you can be totally impervious to the effects of Harvard and Yale education.”

Senator Adlai Stevenson II’s wit was legendary, but many other American congressmen also endeared themselves with their quips. Bob Dole said: “History buffs probably noted the reunion at a Washington party... of three ex-presidents: Carter, Ford and Nixon—See No Evil, Hear No Evil and Evil.” An excellent communicator, Bill Clinton was admired for his grand, uplifting statements. But, off-colour jokes came just as easily to him—“Behind every great man is a woman. Behind every woman is a great behind.” Like Churchill, Clinton came up with evocative imagery: “Being president is a little like being the grounds-keeper at a cemetery; there are plenty of people below you, but no one is listening.”

The world is listening to Donald Trump, but they do not hear wit, metaphors or deft play of words. Much of what Trump says is unfit for children. The rest are slurs, pitting one against another. Bad grammar, spelling mistakes and name-calling pockmark his language.

His insults are crude abuse, repeated ad nauseam so they stick in our heads, congealing thought and language. Crooked Hillary, Little Marco, Crazy Joe Biden, Lyin’ Ted; the bar is lowered, so his Republican opponent Ted Cruz called him a “pathological liar”, “utterly amoral” and a “serial philanderer”. Presidency has not softened Trump’s insulting rhetoric and incendiary language. Orwell wrote in 1946, the year Trump was born: “If thought corrupts language, language can also corrupt thought.”