Revolution ravages reform. Angry demonstrators hurled bricks and Molotov cocktails, burning down a government office in the pilgrim town of Le Puy-en-Velay, 500km south of Paris. The tranquil Catholic hub is now one among hundreds of battlegrounds across France. For two months, police have been battling protestors with water cannons, tear gas, dogs and armoured vehicles. “It was bizarre, like being in a civil war,” says Japanese tourist Itsuki Takahashi, who got caught in a Paris demonstration.

The Gilets Jaunes (Yellow Vests) movement erupted spontaneously when President Emmanuel Macron raised fuel taxes as an environment protection measure. The hike backfired spectacularly. Truck driver Eric Drouet called for protests and mechanic Ghislain Coutard urged demonstrators to wear the neon safety vests—required by law to be in every car—as a symbol of solidarity. It went viral across France and beyond, into Belgium, Italy and Germany. 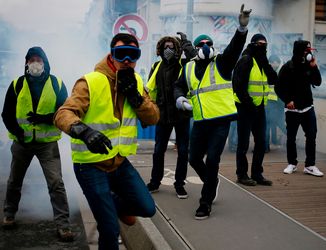 Protests are mostly peaceful, with a large number of women and youth “revolutionaries”. Housewives, students, pensioners and workers are blockading tollbooths, roads, fuel depots, town squares and schools. The intensity of the spreading insurrection forced Macron to scrap the tax. But now, protestors demand his resignation. Says Coutard, nicknamed “Giletman” or “Vestman”: “The president must come out of his hole and face the French people. Not with a press release, but on the ground.”

The fuel tax became a trigger for ordinary people to revolt against the “pro-rich” Macron. Thomas Desmaret, a young former soldier-turned-demonstrator says: “I cannot get work. I rely on food banks for my daily bread. It is wrong.” While the masses suffer dwindling incomes, rising costs, unemployment and higher taxes, Macron abolished wealth tax, benefiting the rich. Public fury exploded. People felt the “elitist, aloof and arrogant” Macron violated the French Revolution ideals of fraternity and equality. So, they used the last ideal of liberty to vent their anger. Egging them, deputy prime minister of Italy’s populist government Luigi Di Maio, who also heads the anti-establishment Five Star Movement, blogged, “Yellow Vests, do not weaken!”

No signs of that, yet. Affiliated to neither trade unions nor political parties, the movement is leaderless, decentralised, flexible and uncoordinated. Activists congregate suddenly at locations, melt when faced with police force, only to regroup elsewhere. Coutard predicts: “The anger is too intense. Macron responded too late. In future it is going to get rough.”

When the going gets rough, the rough get going. The movement’s looseness is a strength, making it hard for the authorities to track, control and crush. But, it is also a weakness, creating possibilities for it to spin out of control or get hijacked by extremist groups, as evident in some violent demonstrations.

Discontent is seething not only in France but also across Europe, in countries ranging from Serbia to Hungary. Battling economic and social distress, ordinary people are rising in protest against callous governments and the entitled elite. They resent their tax burdens at a time of job uncertainties, especially when jet-setting elites flaunt their wealth. Inequality and imposition of taxes on impoverished farmers, while the tax-exempt aristocracy lived in splendour, are among the causes that led to the French Revolution.

To placate the protestors, a besieged Macron urges a two-month break to conduct town hall meetings and engage in a “great national debate”. He is borrowing an idea from an earlier time. It did not stop the French Revolution.