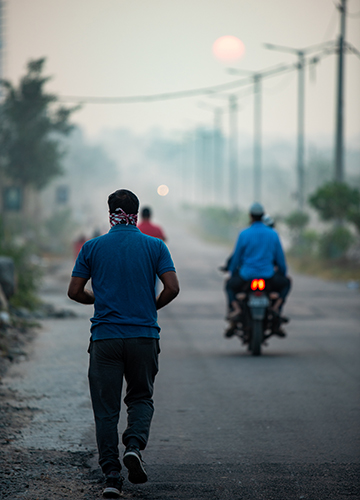 Rise and shine: Joggers in Hyderabad.

The only thing good about jet lag is that you are up early without any effort. I was visiting my city of birth—Hyderabad. The city is home to around 70 lakh residents (2011 census). I was up by 4am and decided to go for a run. I looked at the temperature to gauge my outerwear, and did a double take when I saw the Air Quality Index. It read 302, which was in the hazardous range.

AQI is a measure of air pollution (as stated by the American Lung Association) and tracks ozone (smog) and particulate pollution—tiny particles from ash, power plants and factories, vehicle exhaust, soil dust and pollen. The scale runs from 0 to 500. Under 50 is considered healthy, and anything above 300 is considered hazardous and all outdoor physical activity is to be avoided. Competitive sports generally need the AQI to be lower than 100. I looked at the AQI in New Delhi—hold your breath, it was 493. Exercising outdoors when the AQI is high can cause immediate respiratory issues including shortness of breath and asthma exacerbation. Long-term effects include increased risk of chronic lung inflammation, heart attack and stroke.

I thought a short run really should not hurt, and slipped out of the house at 5.30am. The streets were reasonably well-lit, but there were patchy areas of complete darkness. I started an easy warm-up run and quickly realised that the AQI was the least of my problems. A group of stray dogs was intrigued by me, and was following me. I stopped my run and we surveyed each other. I am a dog lover and they did not scare me. They were not particularly hostile, but were not wagging their tails either. I resumed my run and so did they; I stopped and they did, too. I felt like the Pied Piper. This cycle went on for a bit, till I reached a park—a green oasis at the centre of the city—where I spotted another runner. The dogs lost interest; it is almost like they recognised the other familiar figure and decided I was all right.

I fell in step with the runner and got a glimpse of him as we converged on a street light—he was in his 30s and a little stocky, and was wearing a wool cap, which I thought was a bit much for the cool 15 degree Celsius weather. He had a nice 10-minute mile pace going, which was perfect for me. I put on the light of my phone as it was pitch dark and we were running into oncoming traffic. It was a little unnerving as motorists would come straight at us, and turn just as they were almost over us, honking aggressively. It did not faze the man in front of me. He was pretty nonchalant about it; no emotion at all as we continued our trudge into the darkness. He kept pointing out faults and ditches on the road, which really helped me focus on the run and not kill myself by stumbling into traffic. Chris Rea sang about the road to hell through my headphones.

We did a 3.5-mile loop and were back to square one; the man in front of me showed no signs of stopping. We began the second loop as daybreak hit and I got to take in the city as it came to life. There were other runners now. A young man ran past us like we were standing still. The thought of the AQI hit me as we reached the hour mark. I was not feeling particularly bad or tired, but at mile seven, I saw a Starbucks, which was a cue for me to stop. I caught up to the helpful stranger and thanked him. He seemed a little startled, but smiled and we went our ways. The runner was a symbol of the residents of the city—helpful and stoic despite the problems they faced on a daily basis.

As I walked back to the coffee shop, I got to admire the architecture of the huge houses and the latest store brands, a testament to the affluence of the city. The houses had huge walls and steel gates, with warning signs of ferocious dogs inside. There was a Bentley showroom (there were no cars inside), and real estate signs promising paradise.

I got to Starbucks as it was opening, and the guard checked my temperature as I donned my mask. It was beautiful inside, with American efficiency at its finest. The coffee did not disappoint, and when I asked if they accepted Apple Pay, the young man said “Of course, sir”. It was 0280 rupees for the coffee (used to be 03 when I was in medical school). As I walked home, I saw the workers polishing paradise, getting ready for another day. The crazy traffic, dogs and AQI seemed to recede into the background.