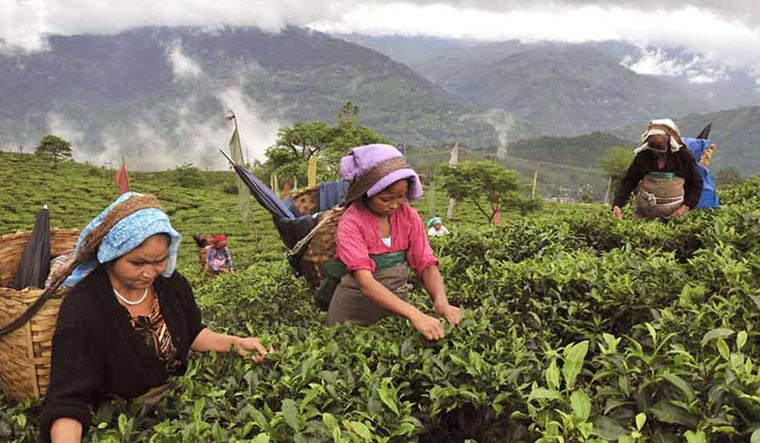 Darjeeling tea, globally famous as champagne of teas, could soon lose its exalted status to silent exports from an unassuming, next door neighbour—Nepal.

Lots of world exporters have replaced Darjeeling tea with tea from Nepal because the Indian variety went off the auctions in July-August because of the political agitation in June 2017. “If you are not in the markets when the auctions are at its peak, it means you are virtually out of the show,” says Sanjay Chatterjee, a tea veteran in Darjeeling.

Operations have started in 87 tea gardens in Darjeeling in north Bengal but the 100-day stoppage last year due to the Gorkhaland agitation has dented supplies and the global brand equity of the product.

Till recently, Darjeeling tea was considered the best in the world, in some markets across the US, UK, and Japan, the demand is still high for the tea.

Some of the bushes are as old as 150 years and were introduced to the region by a Scottish surgeon. The tea—60 percent of which is certified organic—earns a whopping $80m in annual sales. This year, sales could plummet to $40m.

The product from Darjeeling is also one of the world's most expensive, some fetching prices of up to $850 per kg. Darjeeling tea is India's first Protected Geographical Indication product.

Nepal made headway, gaining popularity with Indian blenders and exporters and Darjeeling tea was left behind. “Exporters were quick to replace Darjeeling because they knew they had to maintain the flavour and aroma for the international market. They had no option,” says Anshuman Kanoria, chairman at the Calcutta Tea Traders’ Association.

Kanoria says the Illam variant of tea from Nepal is the closest substitute for Darjeeling tea. Tea experts and connoisseurs often find it hard to differentiate between the two, especially its flavour, look, and aroma.

There are other issues as well. Global buyers do not want to disturb their clients and are always keen to maintain the same taste and aroma as in prior Darjeeling tea purchases. As a result, Indian blenders, with buyer’s consent, started using Nepal tea. Now, exporters carry the Nepal label as the country of origin and then blend it with Indian orthodox variants. Else, they simply use Nepalese tea to be sold as Indian Black Tea to foreign buyers.

“Now the worry is that global buyers have been exposed to the Nepal blend, which is similar to the taste of Darjeeling tea and at lower prices. What happens if they start looking at Nepal at the cost of Darjeeling?” says Chatterjee, adding there is still some uncertainty over total normalcy returning to the gardens in Darjeeling.

“It is a serious issue, it's not a joke. If Nepal tea gets into our business, we will have to live on hard times,” says Sukumar Chetri, an employee at a local tea garden.

During a recent visit of the hills, Bengal CM Mamata Banerjee was told how the import of Nepal tea and its subsequent consumption and export by Indian blenders was gaining momentum.

Nepal, the Bengal CM was told, sends 98 per cent of its annual 37 million kg to India for exports. And its price is 60 per cent lower than Darjeeling tea.

SS Bagaria, chairman of Bagaria Group and former head of the Darjeeling Tea Association (DTA) is worried because of the pricing factor. Nepal enjoys heavy price competitiveness over Darjeeling tea. Bagaria is worried that international buyers might opt to change the blend permanently, to Nepal and other India orthodox tea variants.

“What will happen to the Queen of Teas then, Darjeeling tea would lose its global position. What is worrying me is that the little production that might still happen this year will be mixed flush. It is not good news. The price advantage of tea from Nepal and the uncertainty over future production is worrying me immensely because international buyers might be asking for the Nepal blend. And then, Indian blenders and exporters will have no option to do exactly what the buyers demand,” says Bagaria.

Bagaria says he does not want the European, Japanese and American consumers will adjust to Nepal tea. But is there an option? Darjeeling’s four distinct regular flushes of tea—summer, muscatel, rain and autumn—have different leaf and flavour characteristics and these eventually determine their prices. These flushes are harvested over specific months. The quality of tea changes as per the season. Now this year, the muscatel and rain flushes have been lost and the coming harvest will have mixed flavours.

The gardens have resumed operations but there are major issues confronting the plantations. There are lack of workers, slow clearance and pruning of tea bushes. Besides, working capital is now on a low and the cost of production has increased. Garden owners are unsure if they will be able to produce quality tea.

The Indian blenders are very clear what they would do in such a situation—export tea from Nepal and blend.