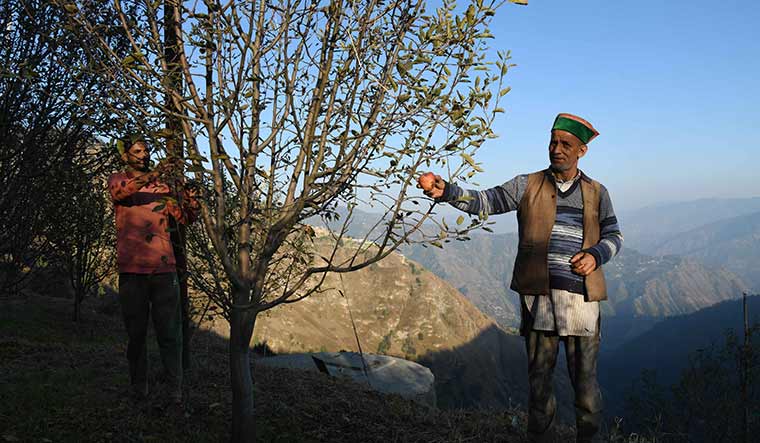 The only thing swadeshi about the apples are the soil and the water we use,” says Rohit Verma, an apple grower in Sarion village, near Theog in Himachal Pradesh. “The fertilisers, micronutrients, pesticides and even the tools are from Europe and America. The war between Ukraine and Russia has had a cascading impact as costs of materials soared. The government increased GST on packaging material by 6 per cent. Now, even the high-yielding apple saplings are imported from Italy. Apples might be identified with Himachal Pradesh, but the farmers suffer. Even if we discount our labour, we are not able to recover our costs.”

His neighbour Joginder Singh chips in. “For a smaller farmer who produces up to 400 boxes of apples, it is no longer possible to sustain his family,” he says. “There should be a support price.”

In the apple belt of Himachal Pradesh, one hears sentiments similar to those found during the massive farmers’ movement in Punjab. Perhaps the apple growers here drew energy from their brethren. The rising input costs, low yield because of climate change, and entry of private players―which tends to benefit big farmers―are worrying apple growers in the hill state. The only cash crop in Himachal is said to be a Rs6,000 crore industry, and impacts lakhs of lives. The apple aside, the state relies on tourism and government jobs as main sources of livelihood.

“The life of an apple plant is 25 to 30 years. It has to be nurtured throughout the year with high-quality products. The irony is that low-quality fruit that ripens early gets a higher price, but the good-quality apple―which hits the market later―gets a lower price,” says grower Prem Kumar. “As the market decides the rates, the fixing of apple prices by Adani this year (Adani Agri Fresh is one of the biggest corporate buyers in Himachal) led to a crash in the overall buying prices, leading to disenchantment among farmers. The apples from Iran’s mechanised farms cost less than the labour-intensive Indian ones. Indian tools and chemical products just do not match the quality. We need government help, and would vote for those who promise to help.”

The impact of the price crash is seen at the Himachal-Haryana border. Here, liquor makers from states like Uttar Pradesh buy low-quality apples at Rs2 a kilo. Thousands of sacks lie in the open as more trucks roll in. 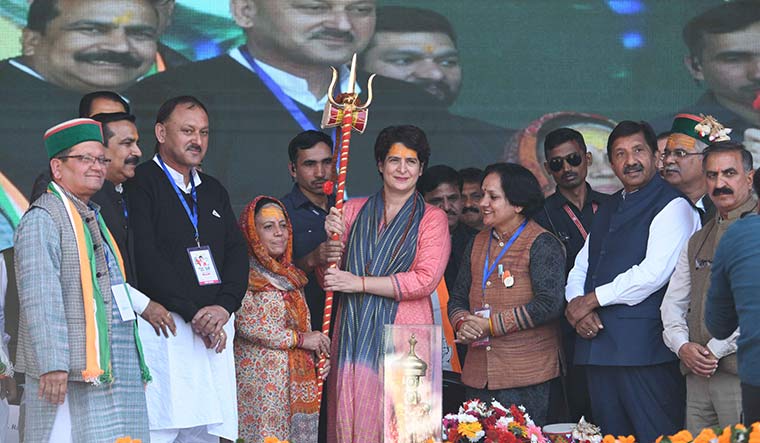 The fight is on: Priyanka Gandhi Vadra at a rally in Mandi | Sanjay Ahlawat

Says Harish Chauhan, convener of the Sanyukt Kisan Morcha, an umbrella body of 27 farmers’ groups: “We are waiting for political parties to include our demands in their manifestos before we decide whom to support.” Any such call could have an impact in the upper districts, which include Shimla, Kinnaur, Sirmaur, Kullu and Solan.

The ruling BJP knows that the state has alternated between two parties―the BJP and the Congress―since 1985. And so, the BJP’s slogan this time is ‘Raj nahi, Rivaaj Badlenge (changing not the regime, but tradition)’.

Chief Minister Jai Ram Thakur dismisses the talk of discontent. “The protests were started by political players. It was not an issue for all, but some. Their main protest was against the increase in GST on packaging material from 12 per cent to 18 per cent, for which our government decided to compensate the farmers,” he tells THE WEEK at his official residence ‘Oakover’, previously owned by the Maharaja of Patiala.

Thakur is currently addressing more than four rallies a day, apart from several smaller congregations. “It is a tough fight, but we will improve our performance,” he says. A five-time MLA, Thakur enjoys a clean image and is part of the second rung of leadership the BJP has promoted as veterans like Prem Kumar Dhumal and Shanta Kumar have faded.

Thakur’s challenges are many, including some from within. Nearly 20 rebels and 11 MLAs, including a minister, were denied tickets; two ministers have been moved to other seats.

The latest headache, though, is the rising drug abuse; the state borders Punjab and there is cross-border smuggling. “If there is one issue I would like to address, it is that of drug abuse among the youth. It is destroying families,” says Sanjay Sood, a former tea seller and the BJP candidate from the prestigious Shimla seat. A former councillor with declared assets worth more than Rs2.7 crore, Sood says the party rewards hard work and grassroots workers.

On November 1, when Home Minister Amit Shah in his Kasumpti rally promised to stem the drug menace, the Congress leapt at the opportunity. It said it would set up a new ‘anti-drug abuse enforcement agency’ if voted to power. “Unlike in other states, this body will be headed by a judge. Owing to its climate, Himachal is an ideal state for rehabilitation,” says Himachal Congress war room in-charge Gokul Butail.

He was part of the party’s Punjab campaign, and has learnt from that experience. “We gave 10 guarantees [to the voter] two months in advance. Already seven lakh women have filled forms for the monthly cash stipend we have promised,” he says.

The Congress’s hopes lie in the anti-incumbency factor. It has sided with the people when it comes to the main pain points, including on the Old Pension Scheme. The Congress governments in Rajasthan and Chhattisgarh have already announced a return to the old scheme. The party is also buoyed by its win in four byelections in the state last November.

“People are fed up with the government,” says Sukhvinder Singh Sukhu, the party’s campaign committee chief. “It has not done anything, and is seen as weak on various fronts.” Sukhu is a frontrunner for the chief minister’s post if his party wins.

What would worry the BJP is that, of the 55 lakh eligible voters, more than four lakh are state government employees and pensioners―many of whom want the Old Pension Scheme to be reinstated. Add their families, and they could impact many seats where the margin of victory is small. “Employees have always agitated against the incumbent government on one issue or the other,” says Thakur. “We have set up a committee to study the demand for OPS.”

It is not something he can promise, given that the Centre does not want to return to the old scheme. “We are waiting for the prime minister’s rallies,” says a government lecturer. “If he announces a return to the OPS, the BJP has a chance.”

Another issue the state government cannot do anything about is the opposition to Agniveer, the new military recruitment scheme. Himachal sends many of its boys to the Army―particularly from districts like Hamirpur, Bilaspur, Mandi and Una, which cover more than 50 per cent of the state’s 68 assembly seats. In a state where unemployment is a problem, a short-tenured, pension-less job would face resistance. Not only that, the Himachalis are now extolling the contribution of the Mahatma Gandhi National Rural Employment Guarantee Act (MNREGA), which was a Congress project.

The BJP is relying on the firepower of its big guns like Prime Minister Narendra Modi, Amit Shah, and party president and Himachal’s son J.P. Nadda. The Congress’s star campaigner is Priyanka Gandhi Vadra. She has a house near Shimla, and is addressing four rallies a day in the absence of her brother Rahul, who is busy with the Bharat Jodo Yatra.

At a well-attended rally in Mandi, Priyanka said, “It is only when governments change that politicians stay in check. This state is the land of tradition. It should maintain the tradition of changing the government.”

It was in Mandi that Rahul had asked for votes for party veteran Virbhadra Singh in 2017. The former chief minister died last year and, though his wife, Pratibha, won the byelection, the party is feeling his absence.

The Congress has not announced a chief minister candidate; neither has the AAP. “We are fighting under a collective leadership. The chief minister will be picked after the polls,” says Rajeev Shukla, the state Congress in-charge.

Besides not having a chief minister candidate, both opposition parties have another thing in common. They have given the voter guarantees (the Congress, 10; the AAP, 11), which include more jobs, free power and financial help for women.

A good AAP performance would help the BJP; it would divide the anti-incumbency vote. But the AAP, which started well in Himachal soon after its Punjab win, has not sustained the momentum despite visits by chief ministers Arvind Kejriwal and Bhagwant Mann. Both the BJP and the Congress say the AAP is more focused on the Gujarat elections.

“In a state where victory margins are low, any good showing by the AAP is bound to impact the Congress,” says a BJP leader. “It is beneficial to us.”

AAP state president Surjeet Thakur says the campaign is getting huge traction. “I have been involved in various elections in Punjab and Delhi, and have managed four in Himachal. We are confident of doing well.”

The elections are on November 12, and each day leading to it is throwing up new problems for the BJP. The party will need more than an apple a day to keep its troubles away.