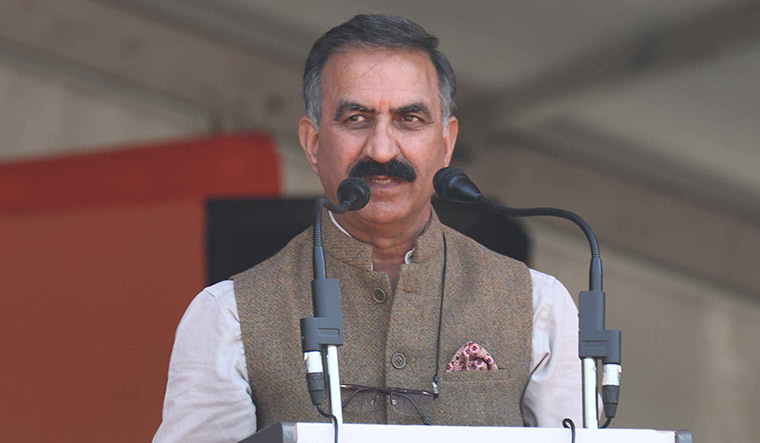 Q/ The Congress has not declared a chief minister candidate. Will that be a disadvantage?

A/ It is a good thing. This is what I told the high command. The chief minister will be elected from the elected MLAs.

Q/ The AAP has grown at the Congress’s expense in some states. How do you view its entry into Himachal?

A/ It has failed in Himachal. It was raising slogans without the work to back it up.

A/ It is a contest against the inefficiency of Chief Minister Jai Ram Thakur. Our strategy is proving right... and we will get the majority.

Q/ So, it is in keeping with the trend of alternating governments.

A/ The BJP wants to turn the fight into Modi versus state leaders. But that election is in 2024. Now, it is Jai Ram Thakur versus the Congress.

Q/ The BJP has ridiculed the others for promising freebies.

A/ What about the [Centre’s] Kisan Samman Nidhi and even Jan Dhan? The AAP [in Punjab] gives 300 units of free electricity after buying from the power companies. Himachal is power surplus. Can we not give 300 units of free power to the population?

Q/ The Congress gave 10 guarantees; some of them are your ideas.

A/ Yes, those on changing the rural landscape and revitalising the rural economy. The guarantees include restoration of the old pension scheme, Rs1,500 monthly assistance for women, 300 units of free power, fixing MSP of fruits and Rs680 crore in interest-free loans for startups.

Q/ How is your campaign different this time?

A/ The political dynamics have changed after 2014. The younger generation relies more on social media. Now, the big rallies by national leaders are for cadre mobilisation. So, Modi’s big rallies are for cadre movement and [have no] effect on the ground. The [number of] perceptional voters is increasing; [voting is no longer] cadre-driven. For example, a voter is supporting the Congress in one election and the BJP in another.

Q/ The BJP often relies on hindutva. Is Himachal any different?

A/ These issues do not work in Himachal as 97 per cent of the state’s population is Hindu. Secondly, it is the caste factor that dominates.

Q/ What are the other factors that could influence the elections?

A/ The police [recruitment] paper leak case is a serious one; no action has been taken. There is anger among the youth because of the Agniveer scheme. It will have an impact in over 50 seats in Hamirpur, Bilaspur, Kangra and Una districts. We may even sweep these areas.