The government has recently tried to pacify various agitating sections 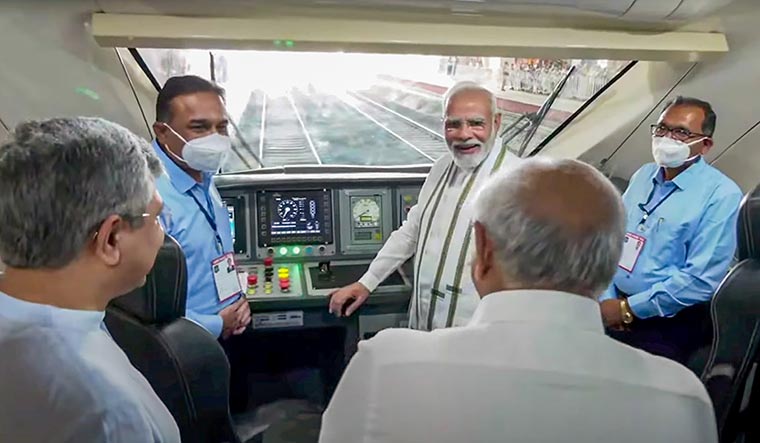 SHENAZ BIHARI is keen to meet Prime Minister Narendra Modi. The 29-year-old, who recently joined the BJP in the presence of Gujarat Chief Minister Bhupendra Patel, is a beneficiary of the Muslim Women (Protection of Rights on Marriage) Act, 2019. Her advocate, Govind Makwana, said that Sarfaraz Khan, her husband and a government employee, gave her talaq and eloped with a Hindu girl three years ago.

Khan is now in jail and has been suspended from service. He is appealing and Bihari, mother to an 11-year-old girl, will need support. She is likely to find it in her new party. Her cousin, Jamsher Khan, too, joined the BJP. Both claimed that they used to be Congress supporters.

They are not the only voters the Congress is likely to lose to the saffron party. Twenty MLAs and leaders have left it to join the BJP since the 2017 elections. Hardik Patel, who was key to the party’s 77-seat haul in 2017, is now with the BJP. Moreover, the Congress has been out of power in Gujarat for 27 years. So, at a glance, winning the polls may seem like a cakewalk for the BJP. But, that is not how it is approaching the contest. Modi and Union Home Minister Amit Shah are campaigning and supervising electioneering―a bad showing in his home turf can dent Modi’s image ahead of the 2024 general elections.

The prime minister started campaigning in Gujarat around six months ago, soon after the results in Uttar Pradesh. Then, Gujarat BJP president C.R. Patil had claimed that the party would win 150 of 182 seats (the record is the 149 seats won by the Congress under the leadership of former chief minister Madhavsinh Solanki in 1985). Recently, Shah, while flagging off the Gujarat Gaurav Yatra―to showcase achievements of the state and Union governments and thank the masses―said that the party will form the government by over two-thirds majority―which comes to around 122 seats.

There are reasons behind the reduced projection. One is the entry of the Aam Aadmi Party into the fray. To make things more complicated for the BJP, there is a growing dissatisfaction among various sections of society and among government employees over long-pending demands. There has been unrest in the police force, and among school teachers, ASHA workers, doctors, cattle breeders and farmers.

The police force, for example, wanted a grade pay revision. AAP national convener Arvind Kejriwal promised them a grade pay at par with the best in the country. The jubilant force celebrated by posting Kejriwal’s photograph on its social media handles. Within two days, the government announced a Rs550-crore package for the police. 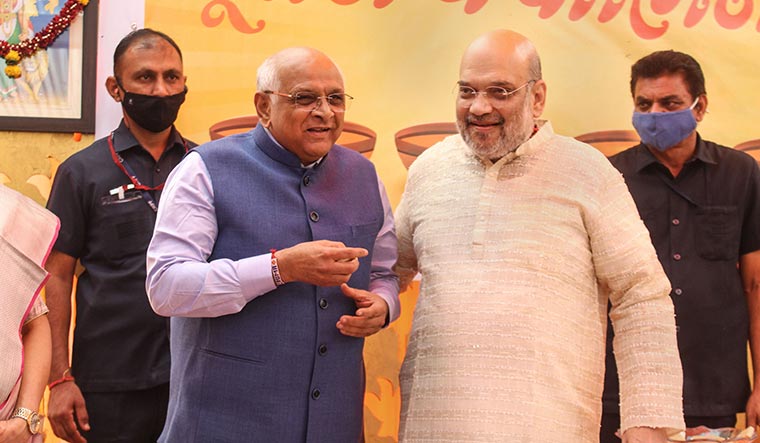 Last month, the government was forced to withdraw the Cattle Control Bill, aimed at prohibiting the movement of stray cattle on roads, after cattle breeders threatened to cut the supply of milk to dairies. Similarly, the government has tried to pacify various agitating sections by meeting their demands.

“The issue is that their demands were suppressed for years,” remarked Hemant Shah, Ahmedabad-based academician and political analyst. “It is all about political market. You are seeing the new entrants (the AAP) making inroads. The BJP cannot afford fence-sitters, who perhaps would have voted for the Congress last time, voting for the AAP,” he said. A small swing here or there can make a difference, Shah added. As a BJP leader who requested anonymity remarked: “If the demands were met a couple of years ago, then it would not have made much impact like it will probably do now.”

Babubhai Raval, 69, from Vadgam, is a retired Army man and he has been steadfast in his support of the BJP. He said the party would need to work harder this time as the AAP is promising a lot of freebies. “Inflation is everywhere,” he said. But, he pointed out that people have got benefits because of the double-engine government. Seventy-year-old Dhanabhai Raval is an example. He and his family of five lived in a tin shed till around five years ago. They now reside in a house built under the government’s housing scheme. 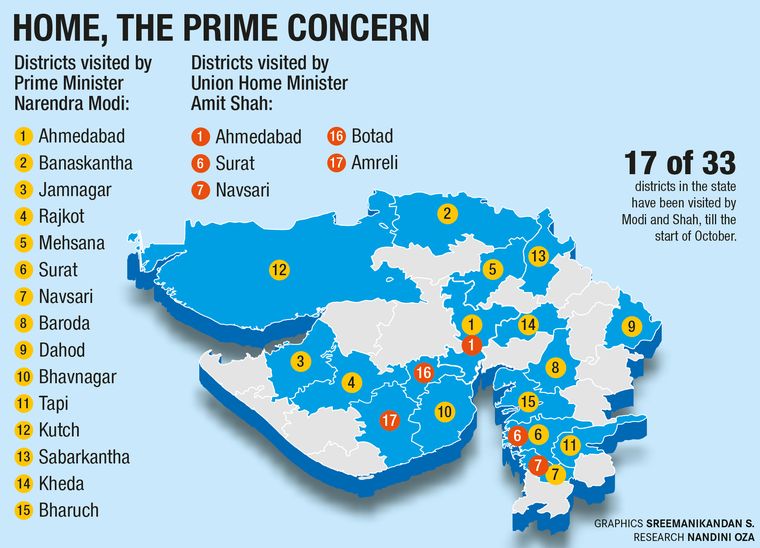 After the AAP announced, among other things, 300 units of free electricity a month, and monthly assistance of Rs3,000 to unemployed youth and Rs1,000 to women, the Congress, too, followed suit with its own set of announcements. The BJP, which had been overlooking the AAP, has been forced to acknowledge it. Regardless of whether the AAP’s reach translates into votes, it has caused discomfort in the BJP camp.

In a recent meeting, Modi came down on free electricity without naming the AAP. While declaring Modhera as the country’s first solar village, he said that the village can also sell extra electricity to the state and added that there was no burden on the masses. The BJP has also targeted old social media posts of Gujarat AAP president Gopal Italia. The posts have adverse remarks on Modi and his mother, Hiraba. The prime minister said that the Congress had outsourced “the contract to abuse him”. Moreover, Delhi minister Rajendra Pal Gautam had to resign after a video of him attending a programme in which Hindus converted to Buddhism went viral.

The BJP has often taken drastic steps. A year back, former chief minister Vijay Rupani and his entire cabinet were shown the door. Now, when these former ministers are not given tickets, there will be resentment and they may stay away from electioneering. Therefore, Amit Shah will have to personally handle the situation.

Meanwhile, the Gujarat Gaurav Yatra is covering 144 assembly segments. Gordhan Jhadafiya, senior BJP leader in-charge of the yatra, said it would cover areas where the BJP does not have MLAs. “The work done by the state and Union governments is being highlighted to defeat anti-incumbency,” he said. The double-engine pitch does work and when it comes to Modi, there is an emotional appeal. The BJP is trying to utilise this fully―Union Minister of State (Fisheries, Animal Husbandry, Dairying) Sanjeev Balyan said during the yatra: “UP gave two-thirds majority to the BJP. Now, it remains to be seen how many seats Gujarat gives.”

Apart from reaching out to the masses, the BJP is also pursuing its go-to strategy―weakening the opposition’s ranks. The biggest example is Hardik Patel, who is said to have joined the BJP fearing the cases against him (he denies this and says there was no pressure). However, Patel has not got a prominent role since the switch earlier this year. Former Congress MLA Ashvin Kotwal also joined the BJP this year. There is a belief in the BJP that Kotwal can swing at least 50,000 votes.

Senior BJP leader and former MLA Bharat Pandya said that the party will be victorious because of Modi’s leadership, the state government’s performance and the strength of the workers. He added that the Congress was still a bigger threat than the AAP, but said that it was fragmented both at the national and state level.

Nonetheless, the BJP is not underestimating the Congress. The prime minister has warned party workers not to be complacent and has pointed out that the Congress has changed its strategy and is holding meetings in villages rather than holding news conferences.

Political analyst Hari Desai said the BJP would form the government “by hook or by crook”. He added that it had “agents” in the Congress and “moles” in the AAP.

Another political analyst Ghanshyam Shah, too, said that it seems likely that the BJP would return to power. However, he said the hindutva card seems to be exhausted. “The party cannot say that the people will vote only for it,” he said. But, he added: “Amit Shah is micromanaging.”