A long-running, high-stakes probe into a crime of passion in Chandigarh has new twist 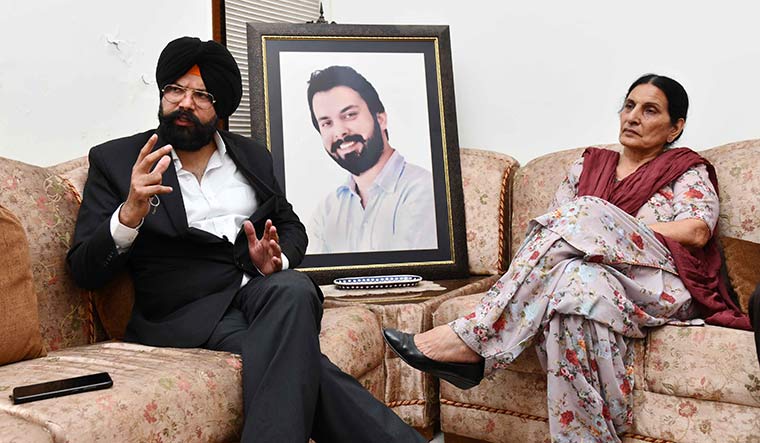 Fight for justice: Sippy Sidhu’s brother Jippy and mother Deepender Kaur with his photo at their house in Chandigarh | Sanjay Ahlawat

IT IS ONE of the more common tropes from true-crime TV shows. Not a mysterious serial killer or a tortured detective on his breakthrough case, but one of those plot-points that keep recurring in Agatha Christie’s Poirot or Miss Marple potboilers: the picturesque tranquility in a pensioner’s paradise is shattered by a heinous crime most uncharacteristic of the place, leading to incessant whispering, storefront chatter and the devious excitement of a whodunit.

Something similar happened in the usually calm and serene city of Chandigarh on September 20, 2015. Around 9:30pm, in a public park in Sector 27, a handsome man of 34 was shot dead allegedly by a former girlfriend. There were at least four bullet wounds on the body; the killer had used a shotgun. The park was 7km from the girl’s house and 11km from the man’s. With the victim and the suspect hailing from influential legal families that knew each other closely for more than 30 years, this case of a jilted love story gets even more interesting when you throw in power and pressure into the matrix.

The slain Sukhmanpreet Singh Sidhu, more popularly known as Sippy Sidhu in Chandigarh, was a lawyer and a national-level rifle shooter. He was also the grandson of Justice S.S. Sidhu, a former judge of the Punjab and Haryana High Court, and the son of I.P.S. Sidhu, former additional advocate general of Punjab. Kalyani Singh, the accused in the murder, is an assistant professor of home science in a college in Chandigarh and the daughter of Himachal Pradesh acting Chief Justice Sabina Singh. At the time of the incident, Kalyani’s mother was a judge of the Punjab and Haryana High Court. On June 15, Kalyani was arrested by the Central Bureau of Investigation when her alleged involvement in the crime suddenly came forth.

The Sidhu family in Mohali, after a sustained pitch to get Kalyani arrested, is breathing a sigh of relief. They are also prepping up for the battle ahead. “We have been saying from day one that it is not just Kalyani but her whole family that is involved in plotting the crime. Even Justice Sabina is involved. All of them hatched the conspiracy,” says Jasmanpreet Singh aka Jippy Sidhu on a Sunday at his bungalow in Mohali. A lawyer, Jippy is dressed in a well-tailored black jacket and trousers. Just back from the court of the special judicial magistrate in Chandigarh where he saw Kalyani fleetingly, Jippy looks tired. “The girl had relations with several other men, including her relatives. That is why my innocent brother did not want to marry her. And even after we refused the proposal of marriage from her family, Justice Sabina maintained friendly relations with us assuring us that she is still Sippy’s aunty,” says Jippy. 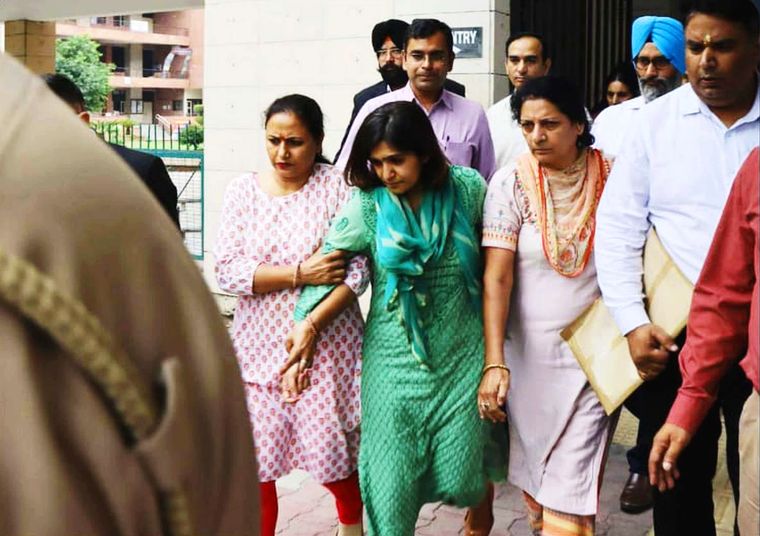 Clouds of doubt: Kalyani being produced in the district court in Chandigarh.

Seated next to him is his mother, Deepinder Kaur, who is holding pictures from a family album that show the Singhs and the Sidhus in good times—at social dos and holidays, with pictures of Kalyani in frocks and ponytails when she was no more than 11 or 12 years old. Ever since her son died, Deepinder has been regularly visiting the park on special occasions to hold candlelight vigils, blood donation camps and to read the path (prayers).

“Justice Sabina is the acting chief justice now. We want Justice Sabina to go on leave. We will then meet the chief justice of India, the Union law minister and we will seek her impeachment. It will be a very long process,” Jippy shares his plan of action, reiterating with much confidence that Kalyani was looking for a suitable opportunity to execute the task from September 18 to 20, 2015. 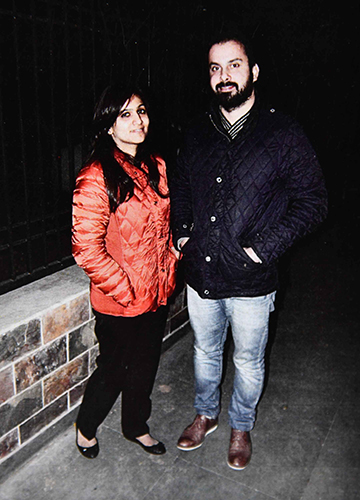 But it is hard to miss the dual narratives at play. The whereabouts of Sippy and Kalyani in the lead-up to the day of the murder are contradictory at best. While the family claims that Sippy was recovering from jet lag after returning from Canada on September 18, the CBI, in its remand report, has stated that Sippy met Kalyani on all three days from September 18 to September 20. On September 18, he was supposed to watch the film Everest at Elante Mall. Calls from a mehndi artist, Harishankar Gupta, the same day had upset Sippy a good deal. On September 20, Sippy told his mother that he was going to meet Kalyani at the Sector 27 park. It was at 7;30pm that his mother saw him last. When she called him at 11pm, she was informed about his death by a woman officer.

It was reported that an unknown accomplice had also accompanied the killer who used a .12 bore weapon from which the bullets were fired. Both immediately left in a car waiting outside the park. The police team investigating the case cited pressure from external forces and the case was transferred to the CBI in January 2016. Then in December 2020, the CBI filed an ‘untraced report’in a special court as sufficient evidence was not found to implicate the accused. But the investigations were kept open under Section 173 (8) of the CrPC.

Advocate Sartej Narula, Kalyani’s counsel, said that 178 witnesses had been examined for six years before the CBI gave its ‘untraced report’in 2020. “Without any new evidence coming up, they pick her up and arrest her in 2022. Now they are trying to say they have a witness. Earlier the story was that she had hired a killer. Now they are trying to make up a story that she was there at the spot and they both shot at the boy. Can you suddenly have a witness after seven years?” asks Narula.

He reads out emails from Sippy to Kalyani from August 2015, clearly stating that it was he who wanted to marry her and she was the one who was avoiding him. “The boy had been sending the girl mails to get married to her, not vice versa,” says Narula. “The emails had been provided to the CBI six years earlier. And I read them out in court on June 19 this year.”

He reads out a letter from August 18, 2015, where Sippy writes, “... if I was fooling you, why would I come to your house with rishta with mom... life is stranger than fiction... I may be a mean person and use people but I am very pakka in love.” And a mail sent on August 29, 2015, reads thus, “In the last seven years we were together, everything was like a celebration and we were 24 hours together and I didn’t go anywhere with anyone. All the things started after November when you left. Kalyani forgive me. Just give the directions from your side. I am trying hard to rectify my mistakes. Whatever wrong I did after November was because of you not being there.” Narula also points out that Kalyani was at her aunt’s place for a birthday celebration from 8pm on the day of the crime. At 9:11 pm, he says, she gets a message from her sister asking her to come to another room in the same house. Then at 10:21pm, there are photographs clicked of Kalyani with her entire family in that house. “So 9:11, she is there, 10:21 she is there. And in that period of one hour, she’s gone, she’s killed, she’s come back and attended dinner again, looking all normal with her hair and make-up intact? Is that possible if she had killed someone a few minutes earlier?” asks Narula.

Who really wanted to marry whom? Where was Kalyani on the day of the crime? Did the former lovers even meet that day? Matters of the heart are complex mazes. And with several high-stake suspects and complainants involved, this will be one prolonged ‘he-said, she-said’thriller denizens of Chandigarh might keep puzzling over like the morning crossword.