The big den: Gir, famous across the world as the last home of the Asiatic lion, is also known for its rich flora and fauna.

It was a chilly winter morning and strong winds were expected. As I hopped into an open jeep and trundled into the woods, I was anxious, curious and excited. After all, it is not often that you have a date with the king of the jungle.

Earlier, the manager of the Asiatic Lion Lodge in Sasan Gir, where I was put up, suggested that we do not bathe before the safari. I did not listen. Much later, when I was literally out in the cold, I realised he had a point. Thankfully, I had listened to the instructions about woollen wear and the need for covering our heads and ears. We left the lodge at the crack of dawn. It was a 6km-drive to Sinh Sadan, from where the journey into the wild would begin. The manager of the lodge completed the formalities at Sinh Sadan on our behalf and an open jeep arrived. I called shotgun and gleefully claimed the seat. The jeep held half a dozen people, including a forest guard, Ghanshyam Baria.

The driver, a local resident, drove slowly on one of the 13 designated safari routes. We had chosen the first safari of the day, the best time to spot lions. The Gir National Park offers three safaris, two in the morning and one late in the afternoon. As the jeep trudged on, Baria softly asked us to look to the left. “A lioness and two cubs,” he said. We did not see them immediately, but then the first rays of sun illuminated the deciduous forest and them. The cubs were playing, but the lioness was evidently unhappy with the call of the crows.

Next, we were greeted by a herd of spotted deer, always alert to the slightest of sounds. Gir, famous across the world as the last home of the Asiatic lion, is also known for its rich flora and fauna. Pointing out a tiny bird, Baria said there were 39 animal species, 300 bird species and 3,500 tree species in Gir. He added that renowned ornithologist Salim Ali had once said that had it not been for the lions, Gir would have been known for its birds.

Hearing the roars of the lions from a distance, punctuated by the chirping of the birds, was in itself a moving experience. But, we were about to hit the jackpot. A lion was sitting on our path. Even as we were processing that, another one emerged from the bushes and walked towards our stationary jeep. 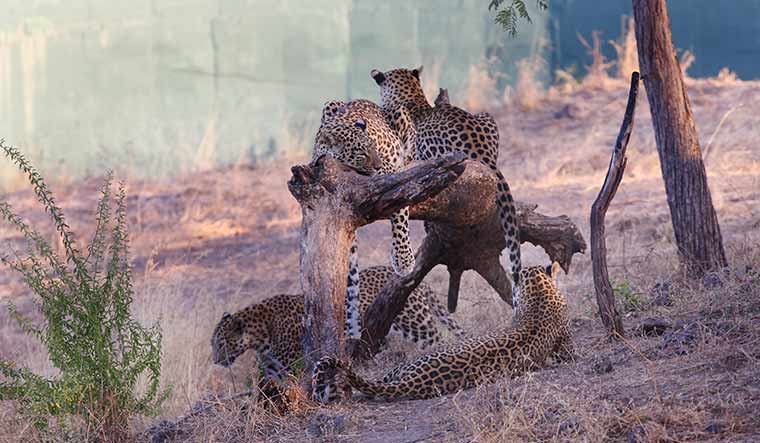 Home to many: Leopards protected at the Devalia Safari Park.

The cameras were clicking away furiously. Baria and the driver told us not to move. The driver then started to reverse the jeep slowly. “They must be brothers,” said Baria, adding that lions generally do not remain together unless they are kin and even then, not for too long. We waited and watched from a distance until the lions left, and then moved forward.

We proceeded towards the Kamleshwar Dam, coming across many herbivores on the way. The watchtower at the dam gave a panoramic view of the forest. It was the perfect setting for selfies. After returning, we felt immensely lucky to have spotted the lions within the first 30 minutes of the three-hour safari.

However, it was perhaps the result of a lot of hard work. In recent years, Gir has seen a steady rise in the number of lions. Mohan Ram, deputy conservator of forests, Sasan Gir, said that the 2020 census recorded 674 lions, of which at least 250 were females. He added that as the numbers were increasing, the lions were regaining landscape and can currently be found in nine districts of Saurashtra. They are residents in five districts and can be spotted seasonally in the rest. The protected area holds 52 per cent of the lion population. 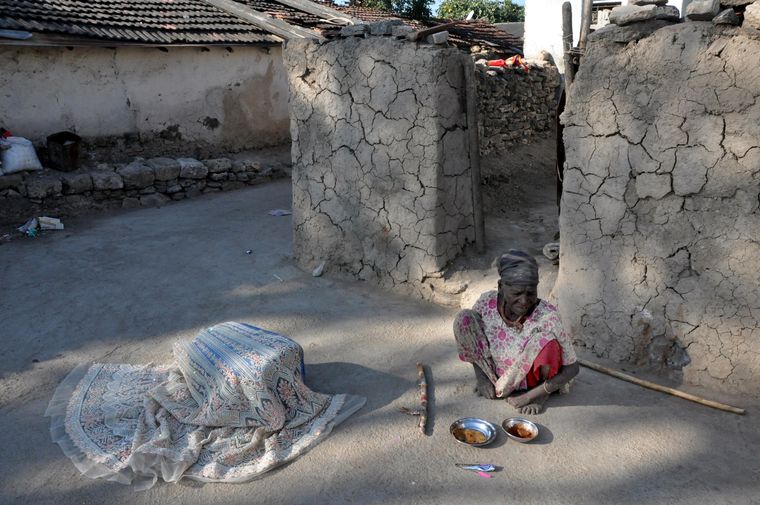 A Siddi woman from Jambur, a village near Gir.

Apart from the conservation efforts, the support of local residents has been key to the increasing number of lions. In 2020, Prime Minister Narendra Modi acknowledged and appreciated the support of the local population.

According to Ram, Gir attracts 5.25 lakh tourists annually. The development and conservation model, and tourism model is inclusive. Locals have not only been trained and recruited as guides, they also drive the safari vehicles. The drivers are paid Rs2,000 of the Rs3,400 charged for the safari. Guides get Rs400, and Rs1,000 is the permit fee.

The region thrives on agriculture, but thanks to the lions, tourism is also a major source of revenue. According to conservative estimates, there are about 400 facilities, including five-star hotels, tent stays and quite a few ecotourism properties, like the Asiatic Lion Lodge, in and around Sasan Gir. Some facilities prop up without proper clearances, but the authorities are quick to crack down on these. 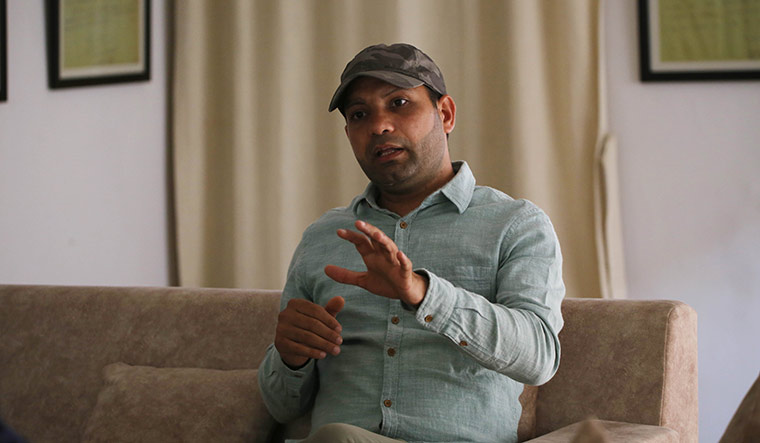 The local residents, whether they be the Maldharis or the Siddis, who trace their origins to southeast Africa, are proud of the lions. Nathiben Khodiyadhar, 65, from Haripur village, on the fringes of the protected area, has fenced her kaccha home to protect the cattle from lions. But, she said she is not afraid of lions and added that they were the pride of the region.

The villagers often lose their livestock to lions. However, they are compensated by the forest department. Alimaben Majbul, from Jambur, one of the villages where the Siddis reside, said: “Nobody hurts lions. The forest department gives us compensation if lions kill cattle.”

Apart from Gir, lions can also be spotted at the Devalia Safari Park, about 12km west of Sasan Gir. The park, which is spread over 4.12sqkm, also houses leopards. Quite a few can be seen in moated enclosures; a guard explained that the leopards in the enclosures were man killers.

As things stand, the population of lions is only set to increase further. The Gujarat government has sought more funds from the Centre under Project Lion. The effort is to increase the population, create gene pools and better medical facilities, manage increased areas and carry out other mitigation measures.

Gir can be reached by road from Ahmedabad; the drive is about eight hours. Visitors can also fly to Rajkot, which cuts the travel time by more than three hours. Amitabh Bachchan says in an advertisement for Gujarat Tourism: “Kuch din toh guzaariye Gujarat mai (Spend a few days in Gujarat)”. And Gir certainly warrants a few days from your busy schedule.