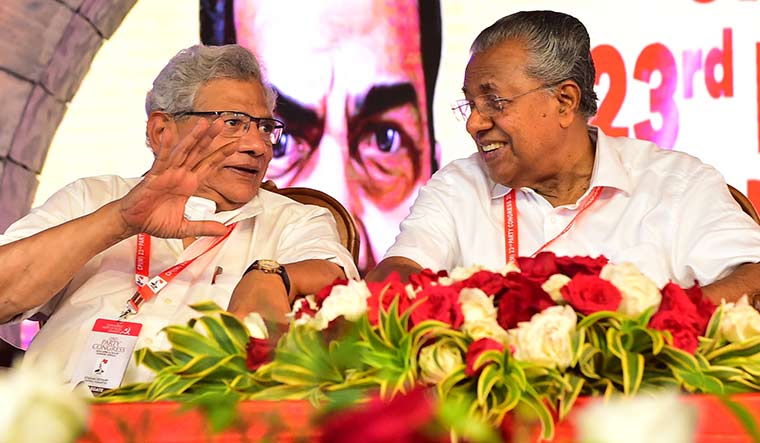 On the same page: Yechury with Vijayan at the party congress | Sameer A. Hameed

THERE WERE SEVERAL new elements at the Communist Party of India (Marxist)’s 23rd party congress in Kannur, Kerala­—from the unisex uniforms of the volunteers (red shirt and khaki trousers) and increased participation of women to the unusual pomp and show on display. The most obvious change, though, was the show of unity from the leaders. “There were discussions, but no differences. That is the speciality of this party congress,” said party general secretary Sitaram Yechury.

The comrades all spoke in one voice. That voice, though, was of the Kerala unit. “The congress saw a complete domination of the Kerala unit over the rest of the party,” said activist and writer M.N. Pearson. “Whether it be the issue of an alliance with the Congress or its approach towards development, everyone listened to the comrades in Kerala because they had come to power for a second time when party units in the rest of the country were languishing. Only the winners get to be heard.”

The story had been different at the previous two congresses. At the end of both, the party was a divided house with bitterness between the factions led by Yechury and former general secretary Prakash Karat. The bone of contention was an alliance with the Congress. While Yechury and the West Bengal faction batted for it, Karat and the Kerala team said no.

This time, the issue seemed to be settled; the party would not have a pre-poll alliance with the Congress. “Defeating the BJP is our top priority and we will do that by organising all secular and democratic forces in the country,” said Yechury on the last day, April 10. “Alliances would emerge only after elections.”

Asked specifically about the Congress, he said: “The Congress should set its house in order first. Compromising attitudes can only lead, as experiences have shown, to an exodus to the BJP.”

Several developments have contributed to this change within the CPI(M), said political observers. “Primarily, the position and credibility of the Congress have taken a severe thrashing in the past few years,” said political observer Jacob George. “Second, the Bengal leaders have realised the futility [of a Congress alliance] as it has yielded them no results in any of the elections in Bengal. Third, and more important, Kerala is the only place the party is in power and it did not want to upset the Kerala unit, which is in direct confrontation with the Congress. It was a pragmatic thing to do.”

The central leadership’s admiration of the Kerala unit was evident when senior leader Brinda Karat said: “The LDF government led by [Chief Minister] Pinarayi Vijayan is a beacon of hope for all of us. A resolution was passed saluting the LDF government and it has been decided to spread the government’s achievements to other parts of the country.”

Former Tripura chief minister Manik Sarkar was also all praise for the Kerala government. “The fact that the LDF could create history by coming back to power for the second time underlines the success of its alternative policies.”

The Kerala unit not only returned to power, but also increased its cadre strength. The organisational report released during the congress showed that, of the total 9,85,757 party card holders in the country, 5,27,174 were from Kerala. The total number of cadres came down from 10,07,903 during the 2018 congress in Hyderabad, but Kerala saw an increase in the number of cadres from 4,89,086 to 5,27,174.

However, outside of Kerala, the party’s prospects seem quite bleak. Even the organisational report said that the party was going through its “most challenging phase” since its formation in 1964. “Two of three strong bases of the party—Bengal and Tripura—are under severe attack, and there has been an erosion in our mass base and influence,” the report noted. “There is a general decline in the strength of the party all over the country with the exception of Kerala.”

The real strength of the left party, despite the poor electoral results, was political credibility, said George. “They may be insignificant in most states,” he said, “but the consistency and credibility of the CPI(M) and its leaders have won them leverage among all political parties and this would help them act as a glue in stitching up anti-BJP alliances.”

However, the CPI(M) should not have looked at national politics through the prism of Kerala, said Pearson. “What the party is doing may be helpful electorally in Kerala, but it will not help the CPI(M) politically,” he said, adding that the country was going through an Emergency-like situation. “Every political party had come together against Indira Gandhi in 1977. The current situation demands such a drastic political move if we are to save our democracy. The CPI(M)’s decision to keep the Congress out of the alliance is a political blunder.”