The farmers will vote for us: Harsimrat Kaur Badal 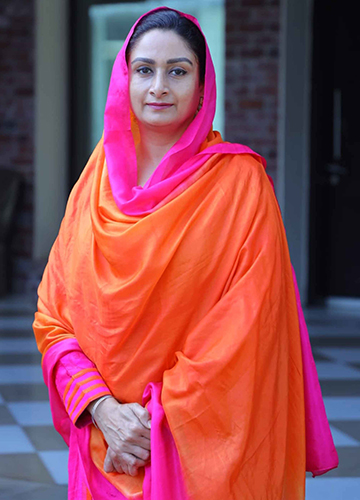 The Shiromani Akali Dal recently celebrated 101 years of its formation. What does the party stand for?

The Congress might be older, but the Shiromani Akali Dal can claim to be the oldest party formed by Indians. When the Akalis won the right to manage gurudwaras from the British, Mahatma Gandhi said the first decisive battle of independence had been won.

The Akali Dal has followed Sikh principles such as Sarbat da Bhala (welfare for all) without any discrimination of caste, colour or creed. Neither oppress anyone nor be oppressed. The people who brought the farm laws should have known who they were taking on.

Has the party, essentially for the Sikhs, become more secular?

Sikhism is a secular religion. Guru Nanak Dev’s companion was Bhai Mardana, a Muslim; the foundation of the Golden Temple was laid by a Muslim saint; our ninth Guru laid down his life for Hindus. That is why caste combinations never worked in Punjab, unlike in other states.

Earlier, the first child in Hindu families was christened a Sikh. Whenever a new president has taken over the reins, his belief system has also been incorporated into the party. Over time, we went into a dark period of terrorism and Pakistan was fomenting trouble; at that time, (Parkash Singh) Badal sahib brought about an alliance with the BJP.

But many Akali leaders such as S.S. Dhindsa and Manjinder Sirsa left the party saying it no longer served the Sikhs.

You are quoting people who have been BJP stooges in the garb of being Akali Dal [members]. They have backstabbed the Sikhs and the party that gave them so much.

Are the doors for a future alliance with the BJP closed forever?

Our party aligned with Atal Bihari Vajpayee ji to keep communal harmony and to make the [Hindu] minorities feel safe and secure. We stood with them through good times and bad. We were the best allies they had. But you saw all their allies like the TDP (Telugu Desam Party) and the Shiv Sena walk away. The Akali Dal was pushed away [with] the way these farm bills were brought in.

I pleaded with them not to do it till all stakeholders were brought on board [and warned of a] huge agitation. I was given lip service. When it was passed in Parliament, I took sides and showed which side we were on. It became a national issue when a cabinet minister resigned. The wounds are deep. There is no question of going back to the alliance when they did not even listen to us.

There is a certain anxiety when the Rashtriya Swayamsevak Sangh tries to present Sikhs as part of a larger Hindu identity.

There is a fear. We have a totally different identity. We have been demanding a different marriage act for Sikhs. There is a sense among Sikhs that they are not respected when someone says they are part of the Hindus.

The Akali Dal is a regional party. Can it take on three national parties?

As Sukhbir Singh ji says, we are fighting three governments—Punjab, Delhi and the Centre. They have huge resources at their disposal. We are the only ones fighting with kirat kamai (hard work). They are using the CBI, the ED and the police. They are trying to finish the only regional party in Punjab.

In the past few years, we are seeing the rise of regional forces against the manner in which the Centre is running the show, be it in Andhra Pradesh, [M.K.] Stalin in [Tamil Nadu], Telangana or Mamata Banerjee in Bengal. I can say with full assurance that this is going to be repeated in Punjab; Punjabis believe that they are not going to be ruled by anyone but their own. The Akali Dal has decided to give the deputy chief minister [posts] to a Hindu and a dalit from the BSP.

The Akali Dal finished third in the 2017 assembly elections. Has it recovered?

There was a reason for that. Sacrilege incidents took place and every Sikh took that to heart. Both [the Congress and the AAP] joined to force the Akali government to hand over the probe to the CBI, saying that they did not have any faith in the state government. They filed PILs and went to the president.

When we sent it to the CBI, the BJP sat on it. One year later, when the Congress government came, they said the state government would sort it out. The issue is revived every time there are elections to whip up emotions. People have seen through that.

The High Court has passed strictures against the state SIT under [IPS officer] Kunwar Vijay Pratap. Now, he has joined the AAP, exposing them further.

Is the Akali Dal still targeted for the sacrilege incident?

For five years, they (the Congress government) could not find the culprits. People understood that the Badals did not do it. We went to the Golden Temple to pray and ask for forgiveness as we could not solve the case. We prayed that whoever played politics over it would be destroyed. After that, see how these parties are getting exposed. We will work 24x7 to bring the perpetrators to book. We want to remove this stain.

What are you promising people in these elections?

We want to bring back peace and harmony to Punjab. [When] we left [the government], even the RBI said we were the best state; all indicators were the best. But now, debt has ballooned. We promise development. People know that the Akali Dal can make any sacrifice, as it did by walking out of the BJP alliance.

Some of the farmers’ groups might contest. Will that impact the elections?

Their affiliations are well known. B.S. Rajewal wanted a ticket from our party; when he was denied, he joined the AAP. These leaders think they have become big, but the fact is that it was a public movement.

People were there to save their land and livelihoods, [they were not there] at the call of any leader. Forming a party or contesting elections will expose them. The Akali Dal is a farmers’ party, and all our farmers were there (in Delhi). They will vote for us.