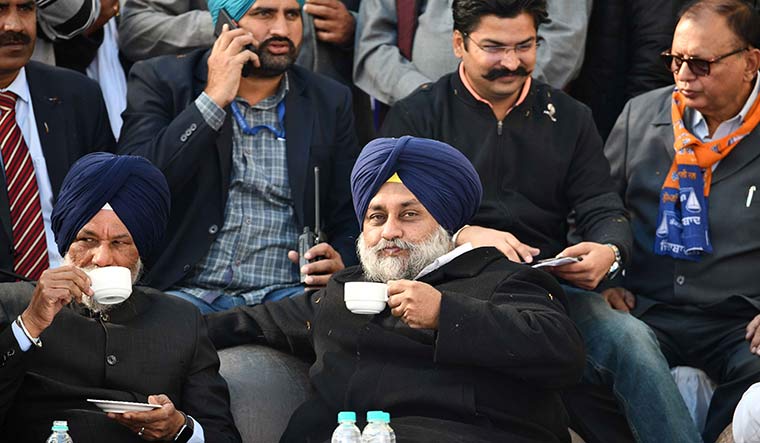 Ratan Singh, 80, has been with the Shiromani Akali Dal since he was a child. “Since voting began in the country,” he emphasises. A farmer who took land on contract, Singh rues that his ideological commitment has not passed on to his sons.

The elder one rents out combine harvesters while the younger is a naib subedar in the Army. “I am a pucca Akali, but in the previous elections, my eldest son told me he would vote for the Congress as it had promised jobs for the youth. I could not stop him. Congress leaders took an oath on the holy book to catch the accused in the [2015] sacrilege case. People were taken in,” Singh recounted as he left Shiromani Akali Dal president Sukhbir Singh Badal’s rally in Samana in Patiala district.

“Six months after the government was formed, I [mockingly] congratulated my son saying my grandson had been appointed a deputy (a euphemism for a police job). He was embarrassed as he did not get what the Congress had promised. Now, he spent 030 lakh to send his son abroad. I have also told my grandson from my second son to prepare for IELTS (International English Language Testing System) and also go abroad.”

Singh’s predicament represents the larger issue in the state—the maniacal rush to go abroad. This is even influencing politics, particularly the country’s second oldest party, the Akali Dal. During the Samana rally, Badal repeated the promise he had been making everywhere. “We will give interest-free loans of Rs10 lakh to students who want to study in any university in India or abroad, for IELTS coaching, so that you do not have sell your land.”

In the Punjabi heartland, affected by migration, a Rs10 lakh loan for education abroad resonates. And the party is just responding to the aspirations of the young. 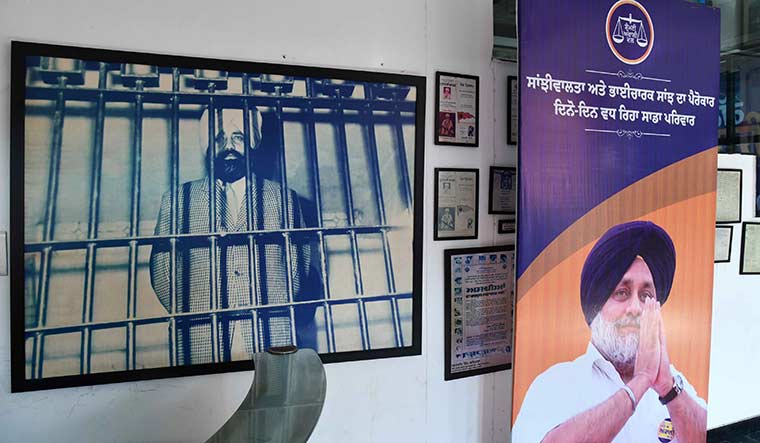 Tough test: An old photo of Parkash Singh Badal and a poster of Sukhbir Badal at the Akali Dal office in Chandigarh | Sanjay Ahlawat

Formed in 1920 as a volunteer force, the Akali Dal became a political wing to lend support to the Shiromani Gurdwara Parbandhak Committee, which took control of gurudwaras in Punjab after a long struggle. The party, which celebrated its 101nth anniversary year on December 14, faced an existential crisis when it was relegated to third place in the 2017 assembly elections.

It dropped 50 seats from its previous tally of 68 (of 117), finishing behind the debuting Aam Aadmi Party. Matters were made worse when the NDA government, which it was a part of, passed the three farm laws last year. The Akali Dal quit the alliance as it feared being wiped out. Now, as the assembly elections near, it is making a vigorous attempt to recover lost ground.

Strategy wise, Sukhbir draws inspiration from West Bengal Chief Minister Mamata Banerjee, who was able to ward off the BJP with her focus on regionalism. Sukhbir, too, wants to present the Akali Dal as the sole regional party of Punjab (like Banerjee had done with the Trinamool Congress). “In the past few years, we have seen the rise of regional forces, whether it is in Andhra Pradesh, Tamil Nadu, Telangana or Bengal. Punjabis believe that they are not going to be ruled by anyone else other than their own,” said former Union minister and Sukhbir’s wife Harsimrat Kaur Badal. 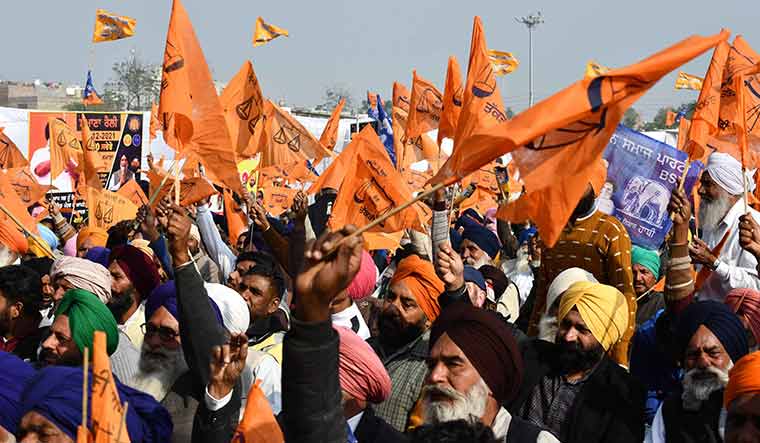 A rally in Punjab | Sanjay Ahlawat

To become a party of the Punjabis, the Akali Dal is projecting itself as more of a secular party rather than just a panthic Sikh one. There are two reasons for this—the changing demographic profile of the state (more Sikh youth migrating abroad), and political stability, which comes when it has all communities, particularly the Hindus, by its side. The BJP tie-up had brought that stability in the past.

“The demography is changing. Sikhs have started going abroad. Workers from Bihar and Uttar Pradesh are coming in large numbers. There is not much of a gap now,” said senior vice president Prem Singh Chandumajra. “The party is taking along traders and employees, and not just focusing on farmers.” Chandumajra is contesting from Ganaur in the Malwa region, where the Akali Dal has traditionally done well.

The shift is visible, with the Akali Dal giving tickets to Hindu candidates, including dalits. “During a recent rally in Pathankot, I was worried if any people would come out. We did not have any cadres there (it was a BJP seat). But when I held a rally in support of our candidate Raj Kumar Gupta, a sea of people turned up,” Sukhbir Badal said at rallies. 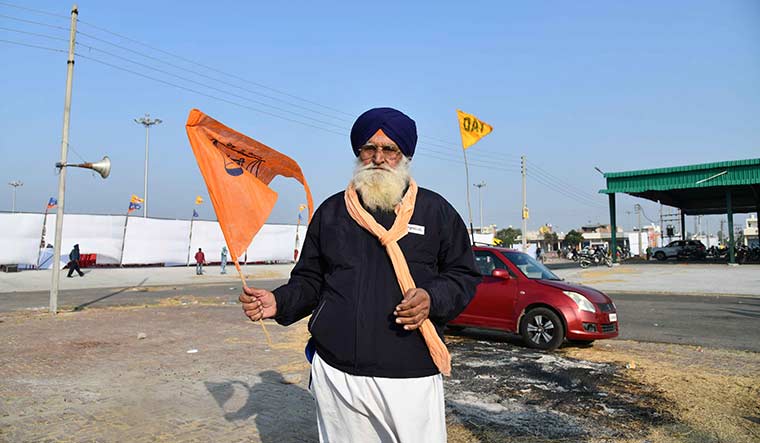 The alliance with the BJP was a game-changer for the party, as before that no Akali government could finish a full term. People had lost faith in the party; faction wars destabilised it. It was only after Parkash Singh Badal stitched an alliance with the BJP in 1997 that the Akali Dal completed a full term—the BJP brought in urban Hindu votes into the fold. Badal, former prime minister A.B. Vajpayee and senior BJP leader L.K. Advani had grown close because of their anti-Congress stance and held joint protests during the Emergency.

Now, after quitting the BJP alliance, Sukhbir has tied up with the Bahujan Samaj Party to try and repeat the 1996 result—the parties allied for the first time and won 11 of 13 Lok Sabha seats. The coming together of Sikhs and dalits is numerically a game changer, but dalits have always voted for the Congress in the past.

If the 2017 assembly debacle forced the Akali Dal to pitch itself as the sole regional-secular party for the Punjabi, it was a similar poor show in 1972—when it won only 24 seats—that made it a more hard line party. The Anandpur Sahib resolution of 1973 talked about Sikh aspirations and greater power. It talked about Khalsa rule, which was later interpreted as a demand for a separate state of Khalistan. 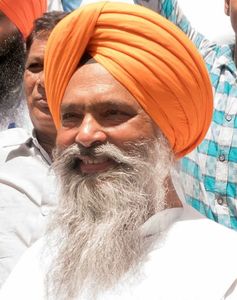 Now, that issue stands weakened. “The Anandpur Sahib resolution talked more about panthic issues,” said Chandumajra. “Our party diluted its wording while keeping the intent of the resolution the same and shifted the focus to greater rights for states and federalism. The Parkash Singh-led Akali Dal presided over the conference on federalism that the then DMK (Dravida Munnetra Kazhagam) supremo M. Karunanidhi organised in the 1970s.”

The Akali Dal’s break with the BJP has also given it a chance to explore uncharted territories. “Earlier, all our conferences took place in gurdwaras; now we are focusing on including people from all communities, including Hindus and dalits, in all party teams,” said Charanjiv Singh Lali, the party’s national vice president.

In Jalandhar, where he is based, Lali said the party was trying to strengthen its urban base. The BJP represented these areas. “Jalandhar city has three and a half assembly seats, where the base of the Akali Dal has been weak. After the alliance with the BSP, we are slowly building our base here. In the past two years, even the youth wings—the Students Organisation of India (SOI) and the Youth Akali Dal—have grown stronger in the Doaba region.”

Since Sukhbir took over from his 94-year-old father, he has been leaving his stamp on the party. He has focused his politics on development, has left the religious issues to the SGPC, and has built the SOI, which brings in a stream of youth to the party.

Several party leaders, though, are not happy with the weakened focus on religion. Senior members such as Sukhdev Singh Dhindsa and Manjinder Singh Sirsa have quit, accusing the Akali Dal of no longer representing Sikh interests. “The Akali Dal has a history of struggles and sacrifices,” said Dhindsa. “Its leaders went to jail during the gurudwara movement, the independence struggle and the Emergency. Has Sukhbir Singh Badal ever gone to jail? He and his coterie hanker after money. The party has given up on panthic issues.” Dhindsa recently floated his own party and it is in alliance with the BJP.

The Akali Dal’s rich history of struggle is seen through the photographs that adorn its party headquarters in Chandigarh. Sikh politics always kept religion and politics together; Guru Hargobind, in his concept of Miri Piri, had said that unless you have raj (rule), you cannot have dharam (religion). “Dharam was always given importance,” said Dhindsa. “But they (Badals) had kept politics in the foreground. We want to prioritise religion over politics and take back the SGPC from them. The Akal Takht (one of the five seats of power in Sikhism) jathedar (a leader of the clergy) listens to the Akali Dal president. He should be a scholar and free from politics.”

Dhindsa’s party has set up a panel to formulate the party line. Among other issues, he is demanding a change in Article 25 subsection 2 of the Constitution, wherein Sikhs are clubbed with Hindus. “We demand that the subsection be amended to recognise Sikhism as a separate religion. We also want to bring changes to the SGPC, which can be done when we have numbers in the assembly.”

This mixture of politics and religion has, in recent years, spelled trouble for the Akali Dal. “We lost [the 2017 elections] because of the [2015 sacrilege] incidents. We will work 24x7 to bring the perpetrators to book. We want to remove this stain,” said Harsimrat.

In December 2021, mobs killed two men for alleged sacrilege in Punjab, marking a return of the issue to politics. “It is a conspiracy and appears to be pre-planned to disturb the peace in the state. The BJP had lost out because of the farm laws. It could be fomenting trouble,” alleged Lali, adding that the aim could be to polarise voters.

There is no doubt a churn in Punjab politics, and there seems to be no clear winner. The four-cornered contest—Congress, Akali Dal-BSP, AAP, BJP-Punjab Lok Congress—has a new entrant as 22 farmer bodies, who steered the year-long farmers’ protests, have also jumped into the fray. They have huge goodwill as they returned victorious, and they have a presence in rural Punjab, which has been a catchment area for the Akali Dal. Sukhbir might have more trouble at hand.

“We faced confrontation earlier, but that is coming down. We have been telling the farmers what all we have done for them. They are listening,” said Chandumajra.

But, will that change with the entry of a new party? “Everyone at the national level, though they were our political opponents, felt that the Akali Dal needed to be preserved and always be present as a face of Sikh nationalism; otherwise, radical elements can come forward,” he said. “It was after the Longowal accord that the Akali Dal decided that its interest lay with India. We believe in democracy and respect all religions and castes. The Akalis are against radicalism. Even the radicals know that the Akalis are a hurdle for them.”