Manipur: Internal rivalry in BJP could help Congress, but it has to do much more 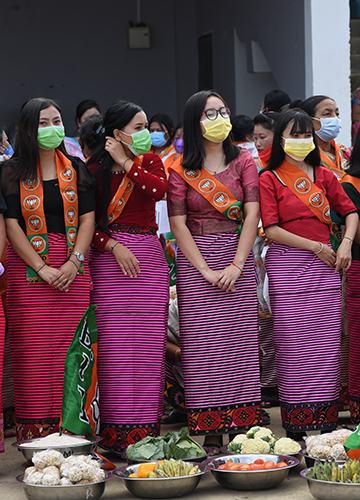 Interestingly, former cabinet minister and former state Congress president T.N. Haokip skipped the meeting. “It is not about Madam Sonia,” he said. “She is a tremendously intelligent leader. But I do not understand the people who surround her. They do not understand the politics of the volatile state and make unsolicited interventions into the state’s organisation.”

Haokip said the upcoming assembly elections—due in March—were among the most crucial in the state’s history, and that the BJP was slightly ahead because of “money and muscle power”. However, the senior leader, who is equally popular with his Kuki tribe and the dominant Meiteis, said that the BJP was unsure of its victory, which is why it was trying to poach leaders from his party. Many senior Congress leaders, including the previous state party president, have defected to the BJP.

“Anti-incumbency has made the state volatile again,” he said. “The Nagas and Kukis are angry with the BJP for playing up hindutva in the state. So, the Naga People’s Front (NPF) and National People’s Party (NPP), which are both Christian-dominated, are upset with N. Biren Singh’s government. Yes, they are part of the NDA (National Democratic Alliance), but if anti-incumbency hits the BJP hard, these partners would leave the alliance.”

In the 2017 assembly elections, the BJP had got 21 seats, nine short of a majority. The Congress had won 28. Several Congress leaders were frustrated that Ibobi Singh had not tried to form the government; he needed only two MLAs. “He showed ethics, but such ethics are of no use today. Because of him, the party suffered for the past five years,” said a senior Congress MLA.

Congress sources said Ibobi knew he would not get any financial support from the Centre had he cobbled together a post-poll alliance and formed the government. The northeast is usually ruled by either the party at the Centre or a party that is friendly with the one in Delhi.

The BJP had formed the Northeast Democratic Alliance (NEDA) in 2016 to bring together all the non-Congress parties in the region. The ruling parties in Nagaland and Mizoram—the Nationalist Democratic Progressive Party and the Mizo National Front—are Christian-dominated, but are also part of the NEDA. Assam Chief Minister Himanta Biswa Sarma is the convener of the alliance.

After the 2017 elections were declared, Sarma elbowed out the Congress and formed an alliance with the Naga People’s Front and Meghalaya Chief Minister Conrad Sangma’s NPP. Though Sarma is now busier as chief minister, he will still campaign in Manipur; he has also deployed his cabinet minister and Rashtriya Swayamsevak Sangh heavyweight Ashok Singhal to look after the day-to-day affairs in Manipur.

The internal rivalry in the BJP, though, could help the Congress. Some supporters of Cabinet Minister Thongam Biswajit Singh, who had jumped ship from the Congress, have gone to Delhi a few times now to lobby for him. A section of the MLAs considers Biren a “dictator” who consults only bureaucrats and not cabinet colleagues. Home Minister Amit Shah met the delegation and called Biren to Delhi to douse the fire temporarily. Shah later sent Sambit Patra as the state in-charge to control the rebellion.

Sources said that, in the meeting with Sonia, Ibobi has pushed for a pre-poll alliance with the NPF and smaller parties. He did not want to repeat his mistake. With major student bodies agitating against the alleged corruption at Manipur University and against the Citizenship Amendment Act, Ibobi wants all the anti-government support he could get. Sonia, however, seems to have turned him down, saying that the Congress was acceptable to all the tribes.

“It is almost decided that we will go alone in the elections,” said Haokip. “We will have a post-poll alliance if needed. On any day, our organisation strength across the state is better than that of the BJP. It is limited to the valley where it plays strong hindutva. But Manipuri Hindus are different.”

The BJP apparently plans to contest a few seats in the hills, too. But the Naga-dominated parts of the region—which account for seven to 10 seats—could be against the BJP, especially after the botched Army encounter on December 4. The top leaders of the National Socialist Council of Nagaland (Isak-Muivah) are from Manipur, and the collapse of the Naga talks would impact the elections. The Congress and the NPF are expected to gain from this.

But the BJP is putting up a brave face. “Who told you we are not popular among the Nagas? We will fight this election in the Naga-dominated areas as well,” said senior BJP leader Loken Singh.

The Congress is hoping that the United Naga Council, the apex body of the Nagas, will ask the NPF to boycott the elections as the Naga talks are in limbo. “This will then be a direct fight between the Congress and the BJP in many seats. We will have a strong chance to form the government,” said Haokip.

Several Congress leaders, however, told THE WEEK that their party had been sleeping for the past five years. It had not taken up any massive political movement and it did not have a street fighter like Mamata Banerjee, who stopped the BJP in its tracks in West Bengal.

“Many of us tried to wake up Ibobi and the others to hit the streets. But they remained under security cover all the time,” said a Youth Congress leader.

Admitted Haokip: “This is the difference between us and Banerjee. She violated all ethics of being a chief minister and hit the streets against the Centre. But we are old timers who played ethical politics. Perhaps we had to pay a heavy price for that. But I agree with the argument that the Congress would have to hit the streets with its allies before the elections if it is serious about winning any state, not only Manipur. Otherwise, you create a G23 or G25, it will not work.”